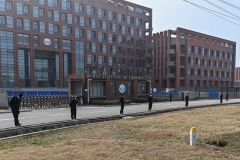 Did COVID-19 leak from the Wuhan Institute of Virology in China's central Hubei province? U.S. scientists who downplayed that theory publicly were privately considering a lab-leak. (Photo by HECTOR RETAMAL/AFP via Getty Images)

They were discussing new email revelations that Dr. Anthony Fauci may have known early on that the coronavirus emerged from a Chinese laboratory that was doing gain-of-function research, although he continued to downplay that lab-leak theory in public.

It's part of a familiar pattern, Jordan said:

And, of course, now they tell us, oh, no, no, the lab leak theory, there was nothing to that. Every time, they're wrong.

I tell people all the time, when you see a headline from the mainstream press that's something the Democrats are pushing, just automatically assume it's not true.

So, that's where we're at...I hope we do have hearings. I hope the Democrats will do it and we can call these people in and get answers for the American people.

Jordan said Fauci needs to be asked "some pointed questions about what he knew when this whole thing started."

"And he approved our tax dollars going to this, which raises obvious questions, Sean, why are we sending money to a lab in China in the first place? And why is Joe Biden putting us back in to the World Health Organization?"

"Part of the troubling thing that we're seeing with these (Fauci) emails that are coming out is not only do they seem to correspond with what President Trump said and what Secretary Pompeo said in terms of the origins of the virus, but it indicates that Dr. Fauci had knowledge, or at least a suspicion of things not happening in an evolutionary manner very early on.

"And he didn't share that with the task force. That's very troubling and something that we do need to get to the bottom of."

Meadows said the release of Fauci's emails calls into question Fauci's congressional testimony: "You know, when he's suggesting that there was no gain of function research that was paid for (by U.S. taxpayers), that they said, don't do it, and they got a confirmation back that said, oh, we're not going to do it -- I don't think that those conversations actually took place. Show us the emails where that actually took place," Meadows said.

"I can tell you, it was Donald Trump who said cut off the funding, and had he not done that, we would have still been funding this research in the Wuhan lab."

"So, there's all kinds of important questions the American taxpayer and the American people deserve answers to."

Jordan said Fauci and other leading scientists downplayed the lab-leak theory, "even though you have people in real time saying it was a real possibility that this virus started from a lab leak in Wuhan, China. They downplay all of that."