Rep. McCaul: If Russia Uses Chemical Weapons, Nukes in Ukraine, 'We Would Have to Respond in Kind' 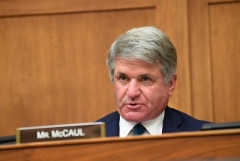 Rep. Michael McCaul, a Republican from Texas and ranking member of the House Foreign Affairs Committee, says "we would have to respond in kind" to a Russian chemical or nuclear attack on Ukraine. (Photo by KEVIN DIETSCH/POOL/AFP via Getty Images)

He said the ever-present concern is Russia's threatened use of short-range tactical nukes against Ukraine:

"We discussed that with NATO when I was there. You know, they brought the 'butcher of Syria' in to fight this -- the second phase of this war. He's a very -- very frightening man. He -- he dropped barrel-busting bombs in Syria on civilians and chemical weapons with Assad in Syria to kill civilians.

"What would happen if a chemical weapon was dropped on Ukraine and/or a short-range tactical nuke? The question there is, would the world idly sit back and watch that happen without doing anything?" McCaul asked.

"What should we do?" Stephanopoulos asked him.

"I -- I just find it hard to believe, and when I talk to the secretary-general of NATO, their job is really to defend NATO, not trigger Article 5. But in my judgment, that -- that's beyond the pale. That crosses a red line. And I think, if that happens, we would have to respond in kind," McCaul said.

"Well, you know, the narrative initially, George, was, it would be over in four days. And they'd have a puppet government in Kyiv. You know, Putin went for everything. He miscalculated. And we saw the Ukrainians win there.

"And then -- and then it was, well, we can help them defend themselves. And now the narrative is, everyone I talk to -- and I've been to the region twice -- they can actually win this war. And I think that should be the goal. And I -- I was pleased to hear Secretary Austin and Blinken echo that thought, that they can actually win.

"I think a win would be to go on the offensive in Donbas with this artillery we're giving them, the howitzers and these lethal drones, and push them out. They're trying to also bomb Odesa. This is an attempt to -- to seal off the Black Sea, you know, all the way from, you know, the Donbas/Mariupol/Crimea into Odesa, and then cut off the Black Sea and choke Ukraine. We have to stop that.

"The Ukrainians have done a great job with anti-ship weapons in Odesa. And they actually downed a -- a Russian warship with their own Neptune, which is really phenomenal. And it's been very inspirational. I do think the fighting spirit and morale of the Ukrainians is far superior to the morale of the Russian soldier right now."

McCaul said he expects President Biden's request for another $33 billion dollars in security and economic assistance to Ukraine to pass relatively quickly through Congress:

"I think time is of the essence," he said:

"The next two to three weeks are going to be very pivotal and very decisive in this war. And I don't think we have a lot of time to waste in Congress.

"I wish we had this a little bit sooner, but we have it now. You know, if I were speaker for a day, I'd call Congress back into session, back into work as we're not -- we won't be in session next week. But every day we don't send them more weapons is a day where more people will be killed and a day where they could lose this war. I think they can win it, but we have to give them the tools to do it."