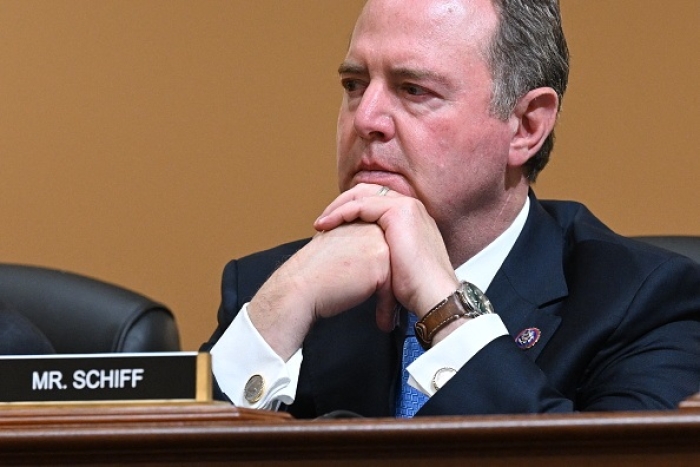 Rep. Adam Schiff (D-Calif.) attends a hearing by the Select Committee to Investigate the January 6th Attack on the US Capitol. (Photo by SAUL LOEB/AFP via Getty Images)

(CNSNews.com) - Even before House Republicans knew they'd won a majority, they were promising various oversight investigations, including one into Joe and Hunter Biden's alleged influence peddling.

Appearing on ABC's "This Week" with Jonathan Karl, Rep. Adam Schiff (D-Calif.), a member of the January 6 committee investigating Donald Trump, said Democrats should comply with subpoenas and follow the law, unlike some Republicans have done, he said.

Host Jon Karl noted that Schiff was "harshly critical of the Trump White House, Donald Trump himself, for defying congressional subpoenas, not cooperating with congressional oversight. What's your advice to the Biden administration?" Karl asked. "Should they comply with subpoenas and cooperate with oversight from this Congress?"

"They should cooperate with appropriate oversight," Schiff said.

"They should follow the law, and that means complying with subpoenas. But they're going to need to analyze whether the Republicans are following appropriate procedures and whether they're doing this just for vexatious purposes. And I don't envy the task they are going to have.

"I think we maintain the high ground. We follow the law. We follow our responsibilities under the separation of powers. But that doesn't detract at all from the abuse that we saw during the Republican administration."

On another topic -- no surprise -- Schiff said he thinks Attorney General Merrick Garland was right to appoint a special prosecutor to look into two Trump-related criminal investigations.

As Garland put it on Friday, "The first...is the investigation into whether any person or entity unlawfully interfered with the transfer of power following the 2020 presidential election or the certification of the Electoral College vote held on or about January 6, 2021.

"The second is the ongoing investigation involving classified documents and other presidential records, as well as the possible obstruction of that investigation."

People will say it's political, Schiff agreed, "but it's the right thing to do, and most particularly if you ensure that it won't cause any delay.

"So if the same prosecutors that have been investigating the former president and others can be moved onto the special prosecutor's team, then there's every reason to do it, no reason not to do it, and I think the person he's chosen (to be special prosecutor) seems to be eminently capable and qualified.

"My concern, frankly, has been leading up to this point, which is they were very slow at the Department to work up the multiple lines of effort to overturn the election. It took them a long time to get started, and the delay has already been baked in.

"I hope that the special prosecutor will move with the alacrity and fulfill the commitment Merrick Garland made, at the outset which is that everybody will be treated equally under the law, including the former president."

Schiff would not say if the January 6 committee will make a criminal referral or referrals regarding Trump.

"We're in the midst of reaching a conclusion on that right now. Should we make referrals, what kind of referrals should we make? I don't want to get ahead of that decision."

Schiff also said the committee is also "discussing" whether to hold Trump in contempt of Congress for defying a congressional subpoena, but he added that the committee has "very limited options."

And, no surprise, Schiff called it a "terrible mistake" for Elon Musk to reinstate Trump on Twitter.

"And it contradicts what Elon Musk said, that he was going to establish a council to evaluate this. And it further contradicts Musk and his claimed concern about bots on his own platform.

"To subject a decision to a poll on the platform that could be easily abused that way, it just underscores the erratic leadership of Twitter now under Musk but also the security concerns, with security people fleeing Twitter and what that means for the protection of Americans' private data."