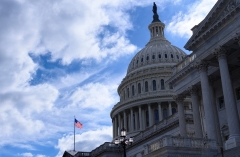 (CNSNews.com) - Rep. Fred Upton (R-Mich.) is one of the 13 House Republicans who broke with his party to help Democrats pass the $1.2-trillion infrastructure bill that President Biden plans to sign this afternoon at a White House ceremony.

The Biden administration expects the House to bring up the "Build Back Better Act," or part two of the Biden infrastructure plan, this week.

"Well, I'm not at all convinced that the Build Back Better plan is actually going to pass or even be considered this week," Upton told CNN's "State of the Union."

I don't think the votes are there yet. A good number of Democrats had demanded and are going to receive a CBO report as to whether is, it really paid for? What does it do when you expand Medicare? What does that do to the solvency?

So I don't -- somehow, I don't think we're going to get these answers to necessarily get the -- for Pelosi to get the votes set before the end of the week. And we also know that this bill is going to be widely different from what the Senate ultimately may do. Not a lot of days in the legislative calendar yet.

We have got the continuing resolution, which, without an extension, would shut down the government December 3, not too far away. And, of course, we have the debt ceiling extension that expires on December 3 as well.

So there are a lot of hurdles before this thing -- before, I'll say, this turkey really starts to move.

But Brian Deese, the head of the White House National Economic Council, told ABC's "This Week" he expects to House to pass the Build Back Better Act this week:

"We're confident that this bill is going to come up in the House this week," Deese said.

It will get a vote, it will pass, and it will move on to the Senate. And those concerns, which we understand and we share, those concerns actually underscore why we need to move out on this bill.

You look at something like universal preschool, you know George, economists for decades have been saying there's probably no single investment that could do more to improve the productive capacity of our workforce than investing in universal preschool. This bill would do that.

Childcare, we know that 2 million women have had to come out of the workforce as a result of COVID and this pandemic. By providing affordable childcare, affordable elder care, we're going to help get those people back into the workforce, which will reduce price pressures while also reducing the practical costs that Americans face.

That's what this bill will do. That's the case we're going to make and that's the case why delivering right now for the American people is the right thing to do.

But it would increase costs for fossil fuel, on which the American way of life heavily depends, by requiring a government-forced transition to clean energy sources.

Sen. John Barrasso (R-Wyo.) told "This Week," he believes the $2-trillion bill -- which may be closer to $4 trillion -- will further stoke inflation:

"The reason I think prices are going to go way up is because of some of the things that they have put into the bill on energy and on climate, which are going to raise energy costs considerably in the year ahead, at a time when the American people are already paying sky-high prices to heat their homes, to drive their cars, to buy groceries.

And inflation, as we know, hurts the most vulnerable. Who gets hurt with inflation?" Barraso asked. "It's the poor people, the people living on a fixed income. It's the elderly. It's all of these folks struggling to get by. I would have never believed that Joe Biden in just ten months in the presidency could bring us to a 30-year high of inflation."