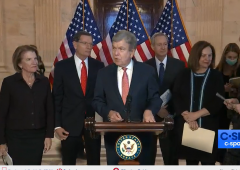 Republican senators call out Democrats' hypocrisy on the filibuster and their false argument on "voter suppression." (Photo: Screen capture)

(CNSNews.com) - One by one, Republican senators took to the microphone on Tuesday to criticize Democrats who wish to abolish the filibuster, using the false argument of "voter suppression" as the reason to do it.

Sen. James Lankford (R-Okla.) called out Democrats' hypocrisy in using the filibuster hundreds of times in recent years, but now saying "it's unfair and it's overused."

"So they're planning to remake the Senate in their own image, where the voice of the minority is no longer heard, and no longer respected," Lankford said:

To be clear, the debate this week is not about voting rights. Federal courts already have the full ability to stay any law in any jurisdiction, in any state in America, that suppresses any voter or any group of voters. That's in federal law right now. This whole conversation about voter suppression is already protected by federal courts right now.

The debate this week that Senator Schumer is bringing is about silencing the voice of the minority in the Senate and everyone that we represent -- literally silencing half the country.

This not about protecting our Republic or our election -- this is about Democrats in Washington taking over every election in every state. This is about Sen. Schumer's power -- that's what this is all about. He's willing to destroy more than two centuries of tradition in the Senate to get his way.

Lankford then quoted Schumer at length as fiercely defending the filibuster when Democrats were in the minority, not so long ago.

"We will not allow them to silence half the country," Lankford concluded.

Election reform not a priority for Americans

Sen. John Barrasso (R-Wyo.) argued that Democrats are out of touch with the electorate.

"Now that doesn't mean it's the number one priority of the American people. People across the country are concerned with things like inflation and COVID and crime in the cities and the crisis at the southern border. But for the Democrats, they think the number one thing affecting the country is, they want Washington to take over elections in the United States."

"And this issue of election reform?" he asked. "That came in at number 23. "It was only an asterisk in the Gallup poll as an issue of concern for the American people."

Pandemic adjustments are not suppression

"State after state leaned forward, as you would hope they would, in the pandemic and added some additional voting things that they had never had before. And in virtually every case...when that election was over, they looked at what they had done and said, how much of that should we keep? And I think state after state have changed their laws in ways that will be easier to vote going forward than it was to vote in 2018...

"...What we don't want to do here...is teach the lesson, if you try to adjust to a momentary challenge, when you try to dial that back, everybody will assume you're trying to do bad things instead of trying to save the best of the things that you tried to do. And whether that's voting by mail or drop boxes or days of early voting, I think you're going to find that the bills they're going to be talking about this week generally have more of all of those than states like New York and Delaware and Connecticut."