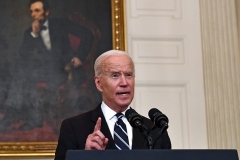 (CNSNews.com) - Several Republican governors are threatening to sue the Biden administration for its "blatantly unlawful overreach" on COVID vaccination.

"I will pursue every legal option available to the state of Georgia to stop this blatantly unlawful overreach by the Biden administration," Gov. Brian Kemp tweeted on Thursday after President Biden's lecture aimed at unvaccinated Americans who are "blocking public health" and causing "a lot of damage," as Biden put it.

"Many of us are frustrated with the nearly 80 million Americans who are still not vaccinated, even though the vaccine is safe, effective, and free," Biden said. "We need to do more. This is not about freedom or personal choice. It's about protecting yourself and those around you..."

"We've been patient, but our patience is wearing thin and your refusal has cost all of us. So, please do the right thing," Biden told the unvaccinated.

Afterwards, South Carolina Gov. Henry McMaster tweeted: "The American Dream has turned into a nightmare under President Biden and the radical Democrats. They have declared war against capitalism, thumbed their noses at the Constitution, and empowered our enemies abroad." "Rest assured, we will fight them to the gates of hell to protect the liberty and livelihood of every South Carolinian."

Noem later appeared on Sean Hannity's show, where she noted that at least 14 governors plan to protect the freedom of their constituents by taking the Biden administration to court:

As for South Dakota, I'll fight to protect my people and to defend their freedoms. In fact, it a shock to me that the president actually said in his speech today that this wasn't about freedom and personal choice at all, which I think is indicative of what is really in his heart and his agenda that he has got for this country.

Listen, this is not a power that is delegated to the federal government, this is a power for states to decide. In South Dakota, we're going to be free, and we're going to be sure we don't overstep our authorities. And we will take action. My legal team is already working, and we will defend and protect our people from this unlawful mandate.

Noem called Biden a "huge hypocrite" for saying as president-elect that he would not mandate vaccines or masks:

"He said he'd create jobs and he's destroying jobs. He said he'd love America and protect us and then he makes friends with the Taliban and compromises our southern border. It's unbelievable to me what he is doing. I knew he'd wreck this country, that's why I campaigned so hard for President Trump. I had no idea anyone alive could wreck this country as fast as Joe Biden is," Noem said.

Here's more reaction from Republicans tweeting their displeasure with Biden's tone and intention:

Texas Gov. Greg Abbott: "Biden’s vaccine mandate is an assault on private businesses. I issued an Executive Order protecting Texans’ right to choose whether they get the COVID vaccine & added it to the special session agenda. Texas is already working to halt this power grab."

Oklahoma Gov. Kevin Stitt: "It is not the government’s role to dictate to private businesses what to do. Once again President Biden is demonstrating his complete disregard for individual freedoms and states’ rights. As long as I am governor, there will be no government vaccine mandates in Oklahoma."

Sen. Chuck Grassley (Iowa): "Ive always encouraged Iowans who are eligible to get the safe & effective COVID-19 vaccine & continue 2 encourage but it is YOUR choice I OPPOSE the heavy hand of federal govt mandating the vaccine on private biz"

Journalist Kimberly Strassel: "Our patience is wearing thin." ??? Brilliant strategy, Mr. President. No doubt your haughty, hectoring lecture will convince skeptical Americans to rush out and get a vaccine. Who writes this stuff?

Iowa Gov. Kim Reynolds: "President Biden is taking dangerous and unprecedented steps to insert the federal government even further into our lives while dismissing the ability of Iowans and Americans to make healthcare decisions for themselves."

"Biden’s plan will only worsen our workforce shortage and further limit our economic recovery."

"As I’ve said all along, I believe and trust in Iowans to make the best health decisions for themselves and their families. It’s time for President Biden to do the same. Enough is enough."

Sen. Jerry Moran (Kansas): "I am vaccinated and I will continue to urge Kansans to get vaccinated. These decisions should be left to each individual, and that decision should be guided by conversations with trusted doctors and not dictated by bureaucrats in Washington, D.C."

Sen. Ted Cruz (Texas): "Joe Biden’s COVID vaccine mandate completely ignores the science and is an attack on Americans’ right to privacy. The feds have NO AUTHORITY to force employers make their employees get vaccinated."

Dr. Jerome Adams, Surgeon General under Trump: "I get the frustration and the intent, but is anyone else a little uneasy at how @POTUS seems to be blaming everything on the unvaccinated?  This could backfire.  Many minorities still have historically founded reservations. Many people have honest questions…"

Rep. Steve Scalise (Louisiana): White House on July 25: Says vaccine mandates are "not the role of the federal government.”

This isn’t about science. It’s about a desperate politician abusing power to appease his radical base.

The Republican National Committee also announced its intention to sue the Biden administration: "Joe Biden told Americans when he was elected that he would not impose vaccine mandates. He lied," Chairwoman Ronna McDaniel wrote.

"Now small businesses, workers, and families across the country will pay the price. Like many Americans, I am pro-vaccine and anti-mandate. Many small businesses and workers do not have the money or legal resources to fight Biden’s unconstitutional actions and authoritarian decrees, but when his decree goes into effect, the RNC will sue the administration to protect Americans and their liberties.”