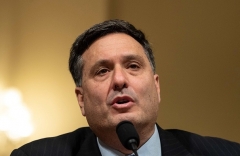 (CNSNews.com) - In the evenly divided Senate, Democrat Joe Manchin of West Virginia has made it clear, in writing, that he does not support the $3.5-trillion reconciliation bill, which contains massive new entitlement programs long favored by Democrats.

But Ron Klain, President Biden's chief of staff, told CNN on Sunday he believes the package will pass, despite Manchin's "strong views" on the price tag.

It is fully paid for by raising taxes on wealthy people. We have had people become billionaires during the pandemic. They should pay their fair share of taxes. We have had 55 big corporations pay nothing, nothing in taxes, when they have record profits.

In fact, passing these tax changes, making the people who aren't paying pay their fair share, collecting taxes from people who owe them and are dodging taxes by using loopholes, using lawyers and accountants, collecting those taxes will make our tax system fairer, make middle-class people share less of the burden, and can help bring down our debt in the long run.

So, I think Senator Manchin's concerns about inflation, about debts, those are concerns we can address with the provisions of this package itself.

The $3.5-trillion plan -- critics say it will cost much more -- includes the Democrats' climate change agenda. And some Democrats are using recent weather events -- fires out west, flooding in the east -- to convince Americans the time is now to act -- and to spend, spend, spend:

You see that with the hurricane in Louisiana, the flash flooding in New York and New Jersey and the historic, unprecedented wildfires my community has experienced. Two of the three largest wildfires in the history of Colorado both happening in my congressional district a mere 11 months ago.

And so I think ultimately what the scientists are telling us, in the form of the IPCC report that was released a few weeks … is that what we're seeing with our own eyes, that climate change is not some crisis that is going to occur at some unspecified date in the future. It's happening now. It is here now. It's impacting our lives each and every day.

And it is critically important for policymakers in Washington to muster the political will to do something about it. And I'm grateful for the first time in a long way, we appear poised to do precisely that through the reconciliation bill, the Build Back Better plan that the Congress is currently working on.

"Can you play that forward for us?" host Wallace asked. " How does that work? What happens immediately, and what else would you like to see happen in the near term?"

"Well, I think as I said, the IPCC report is really this red alert for humanity, right, in terms of really motivating us to do everything we can on a very short runway to avoid the more catastrophic consequences of climate change," Neguse responded:

Ultimately, that means we have to meet the moment. The $3.5 trillion reconciliation bill as has been currently outlined and is now being marked up literally as we speak, in the committees of jurisdiction in the House, I believe meets the moment.

It includes a clean energy standard at the federal level, the first time in our country's history. It would include a Conservation Climate Core, a program that emulates the 1930s-era program, something that I've worked on for the better part of the last year and a half with Ron Wyden, the senator from Oregon, a state that has also experienced devastating wildfires. It includes a herculean investment in EV infrastructure across our country.

So were we to get the bill across the finish line to the president's desk for his signature, it would be transformational -- it would really go a long way in putting us on the path to moving the needle in the fight against climate change.

"They want to begin pushing through a reckless taxing and spending spree that was authored by our self-described socialist colleague Chairman (Bernie) Sanders," McConnell said.

COMMENTARY: Hell No to a Debt Ceiling Increase

Sen. Johnson: $28.4 Trillion Federal Debt is Too Much, Start By Dumping Education Dept