Scalise on Pelosi's Halloween Deadline: 'This Package...Should Be Scary to Every Family in America' 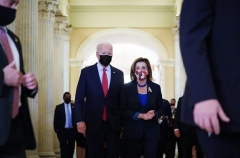 President Joe Biden walks with House Speaker Nancy Pelosi after a caucus meeting at the Capitol on October 1, 2021. (Photo by MANDEL NGAN/AFP via Getty Images)

The $3.5 trillion bill -- actually, many bills in one -- is too expensive and too expansive, say two Democrat senators and all the Republicans. Democrat Sen. Joe Manchin has indicated he might go along with a $1.5 trillion "human" infrastructure bill, but leftists insist that's not enough.

"Scary" is the word used by House Republican whip Steve Scalise in an interview with Maria Bartiromo of "Sunday Morning Futures."

"Now Nancy Pelosi, I guess ironically, is saying that on Halloween, that is going to be the next vote on this package that should be scary to every family in America, because it would raise taxes that every family would pay, not just the rich. It would kill millions of jobs. It would make us less competitive," Scalise said.

"It'd be a gift to countries like China. But they're tying all of that and holding the infrastructure package hostage to this bill that's directly linked together. Even President Biden admitted when he came to the Capitol Friday that the two bills are linked. It's a multi-trillion-dollar package.

"Even if they get the so-called (Manchin) compromise, a $1.5 trillion dollar bill, would devastate America's economy and really be a kick in the gut to middle-class.

Scalise noted that Pelosi already has missed several deadlines she set for voting on the bipartisan infrastructure bill.

Bartiromo asked Scalise to "walk us through what strikes you most about the $3.5 trillion bill."

Scalise said Democrats are "spending money on things that are just crazy," including a carbon tax.

He also mentioned their plan to require banks to annually report to the IRS "aggregate inflows" and "aggregate outflows" for all accounts that are worth at least $600 or that engage in at least $600 worth of transactions.

"If anybody thinks that creating jobs is adding another 80-plus-thousand IRS agents to then go and track every transaction you make over $600 -- that's in this bill," Scalise said;

What does that have to do with building back better or infrastructure or even equity?"

If you look at that, it's about growing the size of government and their ability to track everything you do. There's a whole lot of incentives in here for things that, frankly, a lot of them are going to go to wealthy people.

So, all of these states that are right-to-work states, a lot of car companies that build cars in America without union labor, they won't get a dime of that. So it's literally picking winners and losers and saying, we're going to punish you if you don't have a unionized work force.

That's the backdoor PRO Act in this bill.

What does that have to do with trying to get our economy back on track? It would devastate our economy.

And, worse, Maria, I think this is the thing that every family should be looking at. There is a tax on natural gas. Now, look, we know they hate fossil fuels, although they fly around in private jets. They surely drive in cars fueled by gasoline, but they don't want you to.

And so what they do is, they go after the fossil fuel industry in many ways, but one of them is to put a tax on natural gas. Well, guess what? Probably half of the families in America fuel their homes.

If it's a cold winter, if it's a hot summer, it's going to cost you 14 percent more in your electric bill.

That breaks President Biden's promise that you won't pay anything more if you make less than $400,000. That tax will actually hit the lowest income people the hardest. We tried to take it out. They didn't want to take it out because they want to spend all that money on big government socialism.

Bartiromo asked Scalise if Democrats will fail to pass either bill:

"Well, they don't have the votes," he responded:

"Otherwise, they would have voted on it Friday. They brought President Biden in. And it failed. It was an embarrassment for him. But they're not going to stop.