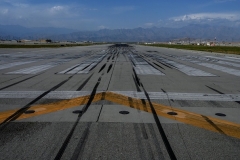 The runway at the Bagram air base where Americans and desperate Afghanis are waiting for flights out of the disintegrating country, now under Taliban control. (Photo by WAKIL KOHSAR/AFP via Getty Images)

(CNSNews.com) - House Republican Whip Steve Scalise (R-La.) was among the congressional leaders who received a briefing on the fall of Afghanistan Sunday from the U.S. Secretaries of State and Defense.

He told CBS's "Face the Nation" that events were continuing to unfold as the call progressed:

And so, in real time, we were seeing things on social media that they weren't really talking about on the call. But it's a very dire situation when you see the United States Embassy being evacuated. And, in fact, you just had President Biden a few days ago saying you wouldn't see helicopters evacuating the embassy like Saigon.

And yet here we are. This is -- this is President Biden's Saigon moment. And, unfortunately, it was very predictable. It seems like many in President Biden's intelligence community got this devastatingly wrong. And I think a lot of questions will be asked later about why, just weeks ago, they were saying something completely different than what we're seeing on the ground today in Afghanistan.

In a written statement on Saturday, Biden tried to shift blame for the disintegration of Afghanistan to the Trump administration, which agreed to withdraw U.S. troops by May 1.

"When I came to office, I inherited a deal cut by my predecessor -- which he invited the Taliban to discuss at Camp David on the eve of 9/11 of 2019 -- that left the Taliban in the strongest position militarily since 2001 and imposed a May 1, 2021 deadline on U.S. Forces," Biden's statement said.

"Shortly before he left office, he also drew U.S. Forces down to a bare minimum of 2,500. Therefore, when I became President, I faced a choice—follow through on the deal, with a brief extension to get our Forces and our allies’ Forces out safely, or ramp up our presence and send more American troops to fight once again in another country’s civil conflict. I was the fourth President to preside over an American troop presence in Afghanistan -- two Republicans, two Democrats. I would not, and will not, pass this war onto a fifth."

"So was all of this inevitable?" host Nancy Cordes asked Scalise.

And, in fact, we've seen a lot of finger pointing and blaming. There used to be a saying that the buck stops here on the president's desk, and he wants to blame everybody else. But, look, President Trump had an agreement in place that was conditions-based. And those conditions were not met. In fact, many of the conditions included that the Taliban wouldn't overtake the cities that they have now overtaken under President Biden's leadership.

And this sends in a more concerning message to our allies around the world, really sends a concerning message to our enemies around the world who are watching this. China is very involved in what's happening right now in Afghanistan, as are other adversaries. And so they're seeing just how easy it was to overtake these areas where the president really said it wouldn't happen and it did happen.

So it's an epic failure on President Biden's foreign policy. He needs to take ownership of it and take other steps to make sure this doesn't happen again. If he's not going to clean house, he was -- he was either widely misled by his own intelligence or he was misleading the American people deliberately.

But he said very different things just days ago than what we're seeing happen on the ground. He's got to take ownership of that.