Schumer: ‘My Daughter and Her Wife Were Sitting Together at Our Rosh Hashanah Dinner When We Heard the News…of Justice Greenberg’ 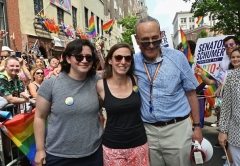 (CNSNews.com) - "The American people don't want Republicans to move forward with a confirmation. They know this is wrong," Senate Minority Leader Chuck Schumer (D-N.Y.) told a news conference on Tuesday.

Schumer used a personal example to illustrate how the Supreme Court's tilt to the "far right," as he called it, "doesn't reflect the values of the majority of Americans."

It's a message to the American people, which is, so much of what you value is at stake, and it affects individuals.

My daughter and her wife were sitting together at our Rosh Hashanah dinner when we heard the news of the terrible tragedy of Justice Greenberg--or Ginsberg's passing and one of them looked to the other and said, do you think our right to marry--they are married already, but -- will be preserved?

So this matters to the American people. It's way beyond politics, but it means that if the American people care about these issues, they should let their Republican senators, who seem to be lining up lockstep, that they shouldn't be voting for this nominee, and then they have the opportunity at the ballot box just 40 some odd days away to change it.

Schumer said the Democrats' "first job is get the majority back, and everything is on the table...We are going to look at how we can produce change."

A reporter asked him, "Do you worry at all that your language about 'everything is on the table' could be used against some of your Democratic Senate candidates in places--"

"Everything is on the table," Schumer interrupted. "My Senate Democratic colleagues and candidates know America needs some change, and we are going to figure out the best way to do it."

Senate Minority Leader Mitch McConnell (R-Ky.) has warned that if Democrats take control of the federal government, they will abolish the filibuster, make the District of Columbia and Puerto Rico states, and pack the Supreme Court. "All these threats have been out there for months," McConnell told a news conference on Tuesday.

But Schumer on Tuesday said McConnell "has defiled the Senate like no one in recent history."

"This was McConnell's rule when Merrick Garland was nominated by President Obama. The American people should have a voice in the selection of their next Supreme Court Justice. Therefore, this vacant the vacancy should not be filed--filled until we have a new president," Schumer quoted McConnell as saying.

McConnell and other Republicans say that was a different circumstance, because Garland was nominated by a Democrat president at a time when the Senate was controlled by Republicans in that particular election year.

McConnell on Tuesday said Republicans "have an obligation under the Constitution, should we choose to take advantage of it, with a president of the same party as the Senate to advance a nomination. And we will certainly do that this year. This Senate is--the current Senate elected the last time in 2018 will be here until the end of the year and the president will be here until January 20th.

"I can only repeat that we have an obligation under the Constitution should we choose to take advantage of it to fill the vacancy. And I assure you that's a very likely to happen," McConnell added.