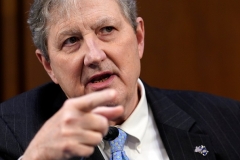 "I am forcing a vote to adjourn the Senate until after the November election. We are not going to have business as usual here in the Senate while the Republicans try to use an illegitimate process to jam through a Supreme Court nominee."

Even before Schumer said that, Committee Democrats were talking about boycotting today's committee hearing.

"Without divulging any confidential discussions I've had, we're prepared for every eventuality," Kennedy said, joking that "we've got  knives, arrows" in their quiver: "And he (Schumer) does, too," Kennedy continued.

"And on the one hand, I mean, Senator Schumer is doing his job. On the other hand, and I say this gently as well. Right now, Chuck's kind of like a teenager. He's mad at everybody. We're going to confirm Judge Barrett. And Senator Schumer needs to fill out a hurt feelings report, and let's move on."

(A short time later, Sen. Lindsey Graham, chair of  the Judiciary Committee, said if Democrats boycott today's hearing, Republicans will change committee rules to allow a vote on Barrett in the absence of a quorum.)

"We all watched the hearings. She stuck the landing. As somebody said on a show the other day, they hit her with everything but a chair. She stuck the landing. And any fair-minded person who watched those hearings, who has read her legal writings -- I have. She knows how to use a semicolon -- who has talked to her students and colleagues knows that she is splendidly qualified in terms of judicial philosophy, intellect, temperament, integrity.

"Now, you may disagree with her judicial philosophy," Kennedy said. "But she believes the role of a judge is to tell us what the law is, not what it ought to be. And I don't believe she is going to be the kind of Supreme Court justice who tries to rewrite the Constitution every other Thursday to satisfy some political agenda. And I think that's what most Americans want."