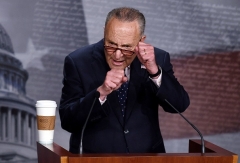 The bottom line: If Republicans refuse to help Democrats pass voting "rights" legislation, Senate Democrats will try to abolish the filibuster -- the rule that requires 60 votes to advance most legislation in the Senate.

"We must adapt," Schumer wrote:

The Senate must evolve, like it has many times before. The Senate was designed to evolve and has evolved many times in our history. As former Senator Robert Byrd famously said, Senate Rules “must be changed to reflect changed circumstances.” Put more plainly by Senator Byrd, “Congress is not obliged to be bound by the dead hand of the past.” The fight for the ballot is as old as the Republic.

Over the coming weeks, the Senate will once again consider how to perfect this union and confront the historic challenges facing our democracy. We hope our Republican colleagues change course and work with us. But if they do not, the Senate will debate and consider changes to Senate rules on or before January 17, Martin Luther King Jr. Day, to protect the foundation of our democracy: free and fair elections.

Two Democrat senators – Kyrsten Sinema of Arizona and Joe Manchin of West Virginia – have so far refused Democrat moves to abolish the 60-vote filibuster. But some Democrats, including President Joe Biden, have shown interest in returning to the “talking” filibuster.

Schumer began his two-page “Dear Colleague” letter by invoking the one-year anniversary of the "January 6 attack on our Capitol and our democracy."

He compared the physical attack by an angry mob to the efforts of Republican-led states to prevent vote fraud.

"As we all are witnessing, the attacks on our democracy have not ceased," Schumer wrote:

In fact, they have only accelerated. Much like the violent insurrectionists who stormed the US Capitol nearly one year ago, Republican officials in states across the country have seized on the former president’s Big Lie about widespread voter fraud to enact anti-democratic legislation and seize control of typically non-partisan election administration functions.

While these actions all proceed under the guise of so-called “election integrity”, the true aim couldn’t be more clear. They want to unwind the progress of our Union, restrict access to the ballot, silence the voices of millions of voters, and undermine free and fair elections. They wish to propagate the Big Lie perpetuated by the former president that our elections are not on the level.

Make no mistake about it: this week Senate Democrats will make clear that what happened on January 6th and the one-sided, partisan actions being taken by Republican-led state legislatures across the country are directly linked, and we can and must take strong action to stop this anti-democratic march...

According to the bill summary, The Freedom to Vote Act would set federal rules for all the states to follow:

Next, the bill establishes Election Day as a federal holiday.

The bill declares that the right of a U.S. citizen to vote in any election for federal office shall not be denied or abridged because that individual has been convicted of a criminal offense unless, at the time of the election, such individual is serving a felony sentence.

Additionally, the bill sets forth provisions related to election security, including by requiring states to conduct post-election audits for federal elections. The bill outlines criteria for congressional redistricting and generally prohibits mid-decade redistricting.

The John Lewis Voting Rights Act, as summarized, would give the federal government more control over state plans to write their own voting rules:

This bill establishes new criteria for determining which states and political subdivisions must obtain preclearance before changes to voting practices may take effect. Preclearance is the process of receiving preapproval from the Department of Justice (DOJ) or the U.S. District Court for the District of Columbia before making legal changes that would affect voting rights.

15 or more voting rights violations occurred in the state during the previous 25 years;

10 or more violations occurred during the previous 25 years, at least 1 of which was committed by the state itself; or

3 or more violations occurred during the previous 25 years and the state administers the elections.

A political subdivision as a separate unit shall also be subject to preclearance for a 10-year period if three or more voting rights violations occurred there during the previous 25 years.

States and political subdivisions that meet certain thresholds regarding minority groups must preclear covered practices before implementation, such as changes to methods of election and redistricting.

Further, states and political subdivisions must notify the public of changes to voting practices.

Next, the bill authorizes DOJ to require states or political subdivisions to provide certain documents or answers to questions for enforcing voting rights.

The bill also outlines factors courts must consider when hearing challenges to voting practices, such as the extent of any history of official voting discrimination in the state or political subdivision.

Senate Democrats made voting "rights" their priority after their failure to pass Biden's "Build Back Better Act" by the Christmas deadline set by Schumer.

Gov. Abbott: ‘Biden Has a Pattern of Spreading Misinformation and He's at It Again’ with Texas Voter Bill