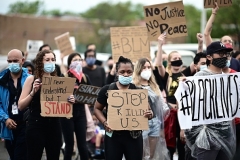 Protesters march on June 3, 2020, during a Black Lives Matter rally in the Queens borough of New York City. (Photo by JOHANNES EISELE/AFP via Getty Images)

(CNSNews.com) - Hours after a New York City police officer was stabbed in an unprovoked attack, Senate Minority Leader Chuck Schumer (D-N.Y.) said he thinks "things are improving over the last day or two" in his city.

"I will tell you this, the overwhelming majority of protesters in New York, tens of thousands, maybe hundreds of thousands, are peaceful protesters," Schumer told MSNBC's "Morning Joe" on Thursday.

As you said, Joe, this is a great tradition of New York. Often, New York is the conscience of the nation. We lead the country to realize our faults and to try and change them.

And I think that -- I am proud that so many young people are out there. We've said over and over again, the greatest worry we have about the young people is that they're apathetic. And now, they're not apathetic. They're looking at what is the poison of America, which has been racism and racial division, which has been with us for centuries, and saying, we must change it.

So I think that I'm proud of New York. And I'm proud of the protests. And I think it is part of the tradition of New York. The violence is bad, reprehensible, should be condemned, but it is not the overwhelming picture in New York.

Schumer did not directly address the stabbing of the police officer late Wednesday night, who was in Brooklyn on looting patrol.

Several cops responded to the scene, and one pulled his firearm, the sources said. The officer and the suspect then struggled for the weapon, which went off striking one officer in the hand and another in the arm.

A sergeant responded to the scene and fired on the suspect, who was struck. The police officers were rushed to Kings County Hospital with non-life threatening injuries, authorities said.

The suspect, a 20-year-old white man, was taken into custody at the scene. He was listed in critical condition.

Widespread looting erupted in New York City on Sunday and Monday nights. An 8 p.m. curfew is now in effect.