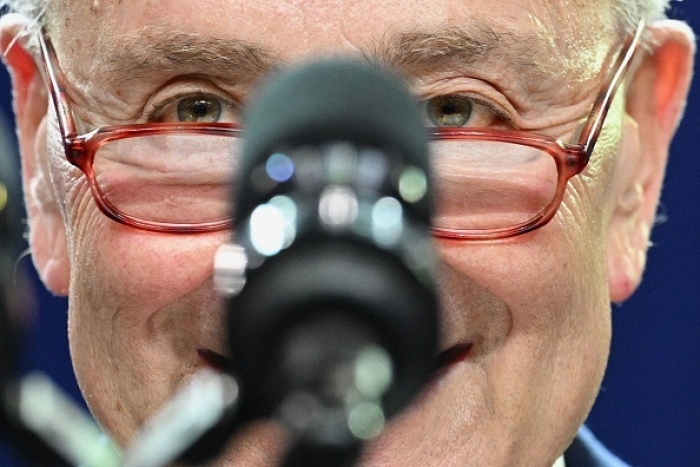 Senate Majority Leader Chuck Schumer (D-N.Y.) is partially obscured by a microphone in this photo by MANDEL NGAN/AFP via Getty Images.

The 51-seat majority will give Democrats much more power in committee matters, such as confirmations, investigations, and regulations.

Schumer spoke about bipartisanship, making it clear that means Republicans must go along with the Democrat agenda: "Turn left, Republicans! Or at least, don't turn hard right," Schumer said, as he and his fellow Democrats laughed.

Here are Schumer's remarks on "bipartisanship."

“And it is my intention to reach out to them and see how can we work in a bipartisan way. And you say, oh that will never happen. Well, look at what happened this summer with a50-50. Of the six major bills we passed, five were bipartisan. And it wasn't that every Republican went along with us. But, most did. Enough did. We are going to keep doing that.

“But it will be better for the Republican Party, but we'll have a strong, healthy Republican Party that believes in democracy and is willing to get things done as well."