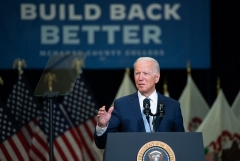 (CNSNews.com) - Sen. Chris Coons (D-Del.) called it "good news" that a bipartisan group of senators has agreed to proceed with a trillion-dollar infrastructure bill -- the largest investment in our nation's history," he noted.

"From grid resilience and broadband, the infrastructure of the 21st century, to fixing our roads and bridges, our rail, our tunnels, our airports -- all sorts of things that we haven't invested in enough over the last 50 years."

Coons said the bipartisan bill is a "key part of President Biden's agenda." But so is a much larger "human" infrastructure bill that has no Republican support. Democrats hope to pass that $3.5-trillion bill with 51 all-Democrat votes under the budget reconciliation process.

Coons told CNN on Thursday that both bills must pass the Senate. It's all or nothing, he said:

"I think what's going to happen is, we're either going to get both -- the bipartisan infrastructure deal -- the hard infrastructure deal, and the robust, ambitious, multi-trillion-dollar Democrats-only bill out of the Senate and over to the House, or we'll get neither. So, yes, we either get both or neither."

Host John Berman asked if Democrats "should hold out for both, at the risk of getting neither?"

"Well, frankly, that's the path we're on right now, is getting both done," Coons said.

"We've moved towards this infrastructure bill where we've got real cooperation between Democrats and Republicans, and I want to congratulate Senators Sinema and Portman, Collins and Manchin. There were so many in the core group of ten senators who really made this happen, collaborating closely with the White House.

"But we are promptly going to move to the other bill before we end up leaving for our probably-brief August recess. So it will be clear to the House whether they've got both coming or neither before they have to take them up."

House Speaker Nancy Pelosi has said several times the House will not take up the physical infrastructure bill unless the Senate passes the much larger, partisan reconciliation bill as well.

Sen. Kyrsten Sinema (D-Ariz.) issued a statement on Wednesday, telling the Arizona Republic, "I do not support a bill that costs $3.5 trillion." She said she will "work in good faith" to "develop" the legislation, which means scaling it back. The enormously expensive bill cannot pass without her support.

As currently configured, the $3.5 trillion reconciliation plan includes most of the Democrats' social agenda, and much of it has nothing to do with traditional infrastructure. Some Republicans have called it a Democrat wish list.

President Biden says parts of his American Jobs Plan that were omitted from the bipartisan bill will be swept into the reconciliation bill, so Democrats aim to get everything they want, one way or another.

Biden plugged the "human" infrastructure plan, or "Build Back Better," in a speech in Illinois on July 7, outlining some of what's in it, as follows:

-- Access to quality, affordable childcare with more childcare centers on community college campuses and new, upgraded childcare facilities all across the country. Middle-class families will pay no more than 7 percent of their income for child care up to age five.  Poor families won’t pay anything.

-- Extension of the expanded Child Tax Credit through 2025, in which the IRS sends cash payments to qualifying parents of young children;

-- Increasing and improving the affordable housing supply by building and rehabilitating more than 2 million homes;

-- Money for Historically Black Colleges and Universities and other Minority-Serving Institutions;

-- Transition to a "fully clean and reliable" power grid;

-- Grants for local projects, such as replacig streetlights with LED bulbs; boosting energy efficiency in homes and schools.