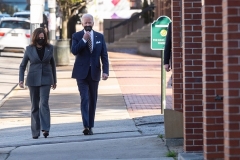 (CNSNews.com) - In Georgia on Tuesday, President Biden said if Democrats in the evenly divided Senate don't get their way on setting federal rules for voting, "we have no option but to change the Senate rules, including getting rid of the filibuster for this."

And the president -- I'm a little embarrassed for him, because he doesn't even have members of his own political party on board in the Senate, much less those who boycotted his appearance in Atlanta, people like Stacey Abrams.

And then this is diametrically opposed to the position that the president took when he was in the Senate, as he was for many, many years, and when the shoe was on the other foot.

The truth is, this is not about voting rights. This is about a partisan political power grab. And they're just trying to dress it up and sell it as something else. And I just don't think the American people are buying it.

Biden and Vice President Kamala Harris went to Georgia to slam the state's new voter integrity law, which is intended to make it harder to cheat in elections by banning ballot harvesting and requiring photo ID, including for absentee voting, among other safeguards. But Biden and his fellow Democrats say the Georgia law is racist, racist, racist -- "Jim Crow 2.0" Biden called it -- and makes it "harder to vote."

Not a single Republican supports the federal legislation for which Biden is willing to scrap the 60-vote filibuster. Democrats recently have called the filibuster "racist" as well.

"Today, I'm making it clear, to protect our democracy, I support changing the Senate rules, whichever way they need to be changed, to prevent a minority of senators from blocking action on voting rights," Biden said. "When it comes to protecting majority rule in America, the majority should rule in the United States Senate."

Cornyn told Fox News that Democrats "don't seem to care" that they used the filibuster more than 300 times in 2019-2020, when Republicans controlled the Senate.

"They don't seem to care that their position is hypocritical and opportunistic, when they happen to be in the majority," Cornyn said.

"Look, the filibuster, which is basically a requirement that legislation be bipartisan, because it takes both parties to come together to meet that 60-vote threshold, that's for the good of the country. And it's good public policy. It forces us to do what doesn't come natural, which is to work together. And I think that's what the American people want from us."

Senate Republican Leader Mitch McConnell (R-Ky.) has long argued that the filibuster exists to protect the rights of the minority and the millions of Americans who would otherwise be shut out of the legislative process.

Cornyn agrees: "Well, the argument that a simple majority should be able to pass a law that affects 330 million people is simply inconsistent with our history and our -- the design of our Constitution, which separates powers, rather than concentrates them, because we saw that as the protection of our freedoms.

"But the fact of the matter is...they're willing to say and do anything to get what they want. But, thankfully, members of their own party are not on board. They're not going to succeed. This is going to be another example of President Biden and his party over-promising and under-delivering."

The John Lewis Voting Rights Act would require states and political subdivisions to obtain preclearance before changes to voting rules could take effect. The Department of Justice or the U.S. District Court for the District of Columbia would decide if states could change their voting laws.

The second bill, The Freedom to Vote Act, sponsored by Minnesota Democrat Sen. Amy Klobuchar, would set federal voting requirements for all the states to follow. States that currently require voter ID would have to accept a wide range of documents, including those without photos, such as utility bills, even expired bank or debit cards.

The bill would make election day a federal holiday, allow same-day voter registration, allow ex-convicts to vote, and allow all eligible voters to vote by mail, among other measures intended to relax state rules.

"The Democrats are the party of government," Cornyn said. "They believe government is the answer to all of our problems, which means they want to crowd out the opportunity for different states to maybe experiment with different ways of holding elections, and then learn what the best practices are.

"But they -- what they don't want to tell you is that they want to eliminate voter I.D., which is also broadly supported by bipartisan majorities. And they want to -- they want to mandate ballot harvesting, which would allow people to go into nursing homes, political operatives, get people to vote in their nursing home and in vulnerable condition, and then cast their ballot for them.

"And there's plenty of opportunity for mischief...with ballot harvesting. And the states, I think, are within their rights to ban it."