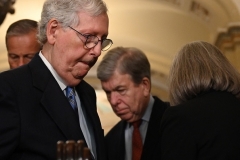 It was a victory for Democrats, who delayed a vote for months, then -- running out of time -- begged Senate Minority Leader Mitch McConnell (R-Ky.) to let them proceed to a vote.

Since July, McConnell has been warning Democrats that Republicans would filibuster the debt ceiling bill. His fellow Republicans were united, all of them supporting McConnell's insistence that Democrats use the cumbersome reconciliation process to pass the bill with 51 all-Democrat votes.

But McConnell abruptly conceded to Democrats on Wednesday. On Thursday, he joined ten other Republicans (see below) in voting with Democrats to break the filibuster. That allowed Democrats to proceed to a vote, which they did.

"Well, we screwed up," Sen. Lindsey Graham (R-S.C.) told Fox News's Sean Hannity on Thursday. "For two months we've promised to the American people that we would not help the Democratic Party raise the debt ceiling so that they could spend three and a half to five trillion dollars through reconciliation.

"We let the people down, and we made the Democrats believe we are all talk and no action. At the end of the day, every Republican voted against raising the debt ceiling, every Democrat voted for it.

"We made a promise for two months that we would make them do it without our help, and we folded. I hate that. We are in a hole. We have to dig out of the hole, and we can't. We shot ourselves in the foot tonight, but we will revisit the issue in December."

Sen. McConnell said he agreed to proceed to a short-term hike in the debt limit to "spare the American people any near-term crisis."

"The majority didn’t have a plan to prevent default. So we stepped forward," he said. McConnell added that Democrats now will have "plenty of time" to use the reconciliation process for the next debt limit vote in December.

McConnell reportedly was worried that Democrats would use the debt-ceiling standoff as an excuse to kill the Senate filibuster rule -- the so-called "nuclear option" -- even though Democrat Sen. Joe Manchin has said he would not go along with that.

Sen. Ted Cruz (R-Texas) noted that there is not a single senator in either party who believes the United States should default on its debt. He described the debt ceiling standoff as "a game of political brinksmanship."

"And I've got to say, for the last several months, I was proud of my party," Cruz said in a speech on the Senate floor. "Republicans were united, we were standing together, we were standing as one, and every single Republican, all 50 Republicans, were telling anyone who would listen, we will not participate in raising the debt ceiling. If the Democrats are going to raise trillions in spending, they need to raise the debt ceiling and own the debt that their reckless spending is producing."

Cruz said he believes that Senate Majority Leader Chuck Schumer "was on a path to surrender," meaning he was about to move a reconciliation bill and raise the debt ceiling through that all-Democrat process.

Cruz said McConnell gave in because he believed Democrats were about to nuke the filibuster. "I don't know if that threat was real," he said. "Ending the filibuster would enable Democrats to pass an even more radical agenda than the one they're doing right now. It would enable Democrats to pass things that would profoundly alter this nation, perhaps irreparably. So I understand why Republican leadership blinked, but I wish they hadn't."