Sen. Hawley: 'Abortion Is Religion for the Far Left' 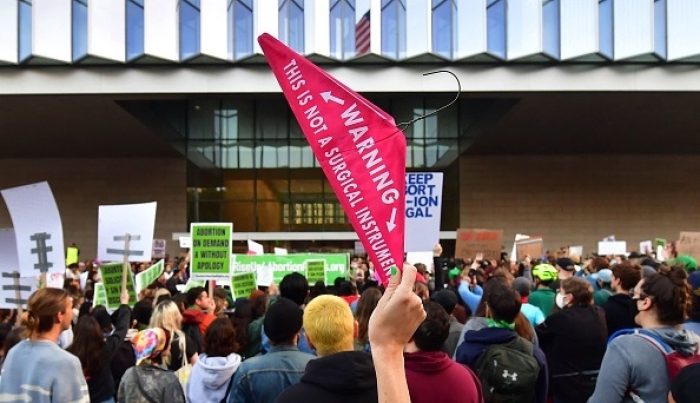 Abortion activists gather outside the US Courthouse in Los Angeles on May 3, 2022. (Photo by FREDERIC J. BROWN/AFP via Getty Images)

Hawley said leftists are "willing to do anything to defend that religion and to force it on everybody else, and that is why they're willing to burn down the court as an institution, you know, they're only for the institution if it does exactly what they say it should do."

Hawley spoke amid shock waves in Washington, produced by the leak of a draft Supreme Court majority opinion, written by Justice Samuel Alito, that states: "We hold that Roe and Casey must be overruled. The Constitution makes no reference to abortion, and no such right is implicitly protected by any constitutional provision...."

Alito wrote that Roe v. Wade "was egregiously wrong from the start. Its reasoning was exceptionally weak, and the decision has had damaging consequences. And far from bringing about a national settlement of the abortion issue, Roe and Casey have enflamed debate and deepened division. It is time to heed the Constitution and return the issue of abortion to the people’s elected representatives."

Hawley picked up on that point -- that abortion decisions should rest with the people's elected representatives:

"And let's be clear what Roe really says. What Roe really says is that the people are too stupid to make these decisions for themselves. The people can't be trusted to actually vote and deliberate and make tough moral choices and says, 'Oh, no, no, nine Justices wearing robes, they should be the ones making all the decisions.'

The leaked draft opinion would remove the federal abortion mandate and allow the states to decide the abortion issue for themselves.

Host Tucker Carlson said he would be happy to have the U.S. Congress vote on abortion. "Why is that a scary option?" he asked Sen. Hawley.

"You know, it's not scary," Hawley said. "It's democracy, and this is about whether or not democracy is going to have its day.

"You know, supposedly, Joe Biden believes in democracy, and yet, today, you heard him, and he was saying that this is too important to be trusted to the whims of the people. Oh, you mean actually the voters? Even the people who elected you? The sovereigns of this nation? I mean, that's what we're talking about here.

"So what the court should do, and what this opinion does do is that it puts democracy back in the driver's seat, and I hope the court will stick with it. They can't turn back now, Tucker, in the face of this pressure."

President Biden told reporters on Tuesday, if the leaked draft accurately reflects what the Supreme Court’s final ruling will be, "It's really quite a radical decision."

Biden also said "the codification of Roe makes a lot of sense."

Then the Catholic, pro-choice president used the word "child."

"Look, think what Roe says. Roe says what all basic mainstream religions have historically concluded — that the right — that the existence of a human life and being is a question.  Is it at the moment of conception?  Is it six months?  Is it six weeks?  Is it — is it quickening, like Aquinas argued?

"I mean, so the idea that we’re going to make a judgment that is going to say that no one can make the judgment to choose to abort a child based on a decision by the Supreme Court, I think, goes way overboard," Biden said.