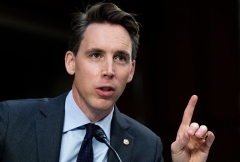 (CNSNews.com) - Sen. Josh Hawley, a conservative Republican, and Sen. Elizabeth Warren, a leftist Democrat, appeared on different television shows Thursday night to give their very different opinions on the recent Supreme Court ruling returning abortion decisions to the people and their elected representatives in the states.

They each described the opposite side of being "extremists."

"I mean, you talk about morally bankrupt, I mean, this is unbelievable. And it also goes to show they don't believe in democracy anymore. What are the Democrats scared of? They're scared that the American people will actually get to have a say in laws about life. And that's what they don't want.

"That's why AOC and all the others are having a meltdown, that's why Joe Biden is up there saying we've got to get rid of the filibuster and throwing little temper tantrums, it's because the American people now are going to get to decide their own laws on life, and the Democrats won't have it."

Sen. Elizabeth Warren (D-Mass.) told "Late Night with Seth Meyers that the U.S. Supreme Court "is basically out of control."

"Now, I think that means the first thing we have to do is remind ourselves the Supreme Court doesn't get the final word. The final word rests with we, the people, and that's why it's so important at this moment to be angry, but to be focused in on that election in November..."

On the abortion ruling, Warren said it's okay to be sad for "two to 24 hours, and after that, cold bucket of water, because now it is time to be angry and to channel that anger into action.

"Sad is about leaning back and giving up, and we can't do that," she said:

"There is a path out of this. It is not an easy path; it is not a guaranteed win -- but I guarantee you this, you don't get what you don't fight for. So it is powerfully important to take the anger over what the Supreme Court has done and channel it into action.

"Right now on Roe, the first one is, there are people out there right now who are pregnant and who need help they need protection and we need to pour resources into helping them. That means each of us volunteering money, volunteering time to support the organizations that are trying to help people.

"The administration is stepping in, using all of its tools, and I commend the president for stepping up, for example, on medication abortion, making that more widely available, protecting people who have to cross state lines in order to get help.

“We should be looking at the fact that the federal government, biggest employer in the country, make sure that people have got time off from work and resources to travel. So we need to do things to protect people who are pregnant now and who get pregnant next month and the next month because this is the urgent problem in front of us.

"But the second thing we need to do is we got to focus like a laser on the election in November. Understand -- this small minority that wanted to overturn Roe has been disciplined, they have worked at this for nearly five decades.

“They lost, and they got back up and they stayed in the fight and they helped all of those senators who helped shepherd through these justices who swore until the world looked level that Roe was settled law, and that we don't disturb settled law. And as soon as they got the votes, they went ahead and did not just to chip away at Roe, just blew the whole thing up.

"We need to be just as committed, just as focused on this election in November. Two senators, if we pick up two Democratic senators who will help us get rid of the filibuster, which the president has now said he's on board for that, and who will give us Roe v Wade, two senators."

She mentioned the two Senate races in Pennsylvania and Wisconsin: "We get those two senators in, we hang on to the House and Roe v Wade will be the law all across America. That's what we can get done. That's a fight worth having."