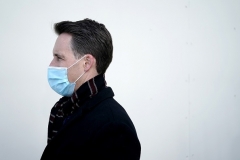 (CNSNews.com) - Sen. Josh Hawley (R-Mo.), under partisan attack for arguing against congressional certification of the Electoral College vote, said efforts to silence him -- including the cancellation of a book deal with Simon & Schuster -- show "we've got Big Tech and the big corporations...in league with the left."

It is an unbelievable attempt by big business, Big Tech and the left to try to censor all dissent, to try to shut down all opposition to try to silence half of America.

And while the Democrats talk about unity in Washington, they don't want unity. What they want is total control, and these big corporations are right there with them trying to achieve it. And, Sean, we've got to stand up and say, we will not bow down to the mob.

Seven Democrat senators have filed an ethics complaint against Hawley and Sen. Ted Cruz (R-Texas), for lending "legitimacy to President Trump’s false statements about election fraud by announcing that they would object to the certification of electors on January 6."

According to the complaint, "While it was within Senators’ rights to object to the electors, the conduct of Senators Cruz and Hawley, and potentially others, went beyond that. Both senators announced their intention to object to the electors after baseless claims of election fraud, which...they knew to be baseless, had led to threats of violence. Both senators persisted in their objections after those threats came to fruition. Their actions lend credence to the insurrectionists’ cause and set the stage for future violence. And both senators used their objections for political fundraising."

Some Democrats are calling for the expulsion of the two Republican senators.

And this is why I say, you know, listen, the First Amendment may protect the right of my Democrat colleagues to slander me and to lie, but it does not give them the right to try to abuse the power of the Senate to silence me and silence Senator Cruz and others.

The people of Missouri sent me here to represent them. That's exactly what I'm going to do, and I'm not going to be intimidated by the liberal mob.

"My point is, this is my only opportunity during this process to raise an objection and to be heard. I don’t have standing to file lawsuits. I’m not a prosecutor anymore. I used to be, but I’m not anymore. I can’t investigate claims of voter fraud on my own, but I do have a responsibility in this joint session of Congress to either say ‘I’ve got no problem with it’ or ‘I do have a problem with it.'”