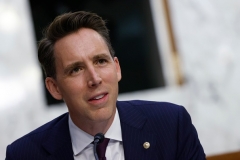 Sen. Josh Hawley (R-Mo.) is demanding answers from Twitter and Facebook after they blocked users from sharing a New York Post story about the Bidens and Burisma. (Photo by SAMUEL CORUM/POOL/AFP via Getty Images)

Hawley said he's asked the Federal Election Commission to investigate what "looks like an in-kind contribution to the Biden campaign."

The senator appeared on the "Ingraham Angle" Wednesday night:

And that's why I will be inviting, and asking, Facebook and Twitter to come testify under oath to my subcommittee in the United States Senate. The American people deserve answers.

I've also asked the Federal Election [Commission] to open an investigation. You know, this looks like to me like an in-kind campaign contribution to the Biden campaign. I want to know what context did Twitter and Facebook and others have with the Biden campaign when they decided to start censoring this "New York Post" story on behalf of the Bidens.

This thing just stinks. It reeks. And this is going to pull the lid off I think on just the corruption surrounding big tech.

Dorsey tweeted: “Our communication around our actions on the @nypost article was not great. And blocking URL sharing via tweet or DM with zero context as to why we’re blocking: unacceptable.”

"You, know, it's so insulting," Hawley said. "I read that statement, and I was insulted by it. It insults the intelligence of every single American citizen. We're not stupid. We can see that Twitter rushed to suppress the story, to censor it on behalf of the Bidens, just like Facebook rushed to do the same thing.

"Yeah, the fix is in. They want to rig the election and use their monopoly power, and we can't let them do it."