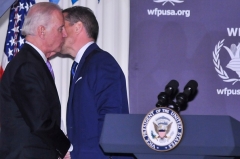 (CNSNews.com) - The Biden influence-peddling story "is a huge mess, it's not going away, it's going to be a bigger mess if Joe Biden becomes president," Sen. Ron Johnson (R-Wis.) told "Sunday Morning Futures" with Maria Bartiromo:

Press reports says the FBI is actively investigating information found on Hunter Biden's abandoned laptop "in connection with a money laundering investigation" that began in late 2019.

The story ramped up after Sens. Johnson and Chuck Grassley (R-Iowa) released a report showing millions of dollars in questionable financial transactions between Hunter Biden and his associates and foreign individuals, including the wife of the former mayor of Moscow and individuals with ties to the Chinese Communist Party.

The senators' report also details potential conflicts of interest arising from Hunter Biden's lucrative position on the board of Burisma, a Ukrainian energy company with a reputation for corruption, while Joe Biden was vice president and the Obama administration’s point man on Ukraine policy.

"Those of us who are investigating this -- and we're doing it for a very serious purpose -- because this is a mess. It's a huge mess, and it's a mess that's not going away, particularly if Vice President Biden becomes president," Johnson said:

It's one of the reasons I've been saying for quite some time that I never felt that Vice President Biden should ever run for president.

I mean, this is probably one of the reasons that President Obama did not encourage the vice president to run. So this is a huge mess, here's further evidence of it that the FBI apparently opened up the investigation in 2019.

One of the questions  I would have, is why didn't they open it up in 2018? You know, this is when they convicted Devon Archer of the Indian bond fraud. I think a lot of this information was probably available, some of these transactions were occurring back then.

I mean, the question I have, did they not look into Hunter Biden because of his last name? It's a serious question, the fact that we might, we probably have two systems of justice -- one for Democrats and the well-connected and one for Republicans like president trump and the rest of Americans. That's one of the reasons that the American people are losing confidence in agencies like the FBI.

"You need to build the case before you kind of bring in the prime target of the investigation, so we're starting to get that information.

"Our report basically broke a log jam, people coming forward, the computer shop repair owner stepped forward, Tony Bobulinski came forward  You know, certainly I would start subpoenaing people like James Gilliar and Rob Walker -- the people that were involved with Tony Bobulinski as well, so you have to build the case."

Johnson admitted there has been "resistance" among some Republicans who are reluctant to dig into the alleged Biden family corruption: Some of them would "rather concentrate on other things," he said, despite the "gory detail" that is emerging.

"I would argue that anybody trying to work for a Biden White House, if they had the connections that Joe Biden and his family has with Chinese Communist Party, they would not get a security clearance,” Johnson said.

"That's a serious issue to consider when you go into the polls and whether you're going to pull a lever for Joe Biden. Again, this is a huge mess, it's not going away, it's going to be a bigger mess if Joe Biden becomes president."

Bobulinski Says He Met Twice With Joe Biden ‘To Discuss What I Was Doing With His Family’s Name and the Chinese’
MRC's Bozell Calls On Conservatives to Share Hunter Biden Story Media Are Trying To Cover Up
NY Post: Former Business Partner of Hunter Biden Says Joe Biden Was In On Family Deal 'to Make Millions' From China