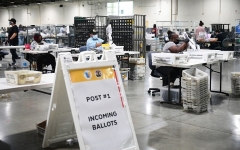 Mail-in ballots are processed in California on September 9, 2021. (Photo by FREDERIC J. BROWN/AFP via Getty Images)

To restore confidence in our elections, "we have to do, at a minimum, three things," Kennedy said:

"First, we have to defeat, as we have so far, President Biden's attempt to establish a federal election code.

"And number three, you -- and this is unconditional," Kennedy said. "You have to be required to prove you are who you say you are to vote. And if we would do those three things, I think people would have a little more confidence in our election system."

An undisclosed number of mail-in ballots have yet to be counted, as the rival campaigns fight over including mailed ballots where the voter omitted the date. A recount of all votes cast is widely expected in the days ahead.

Sen. Kennedy noted that as of Monday, President Biden has been in office for a little over a year. "So we are on day 488 of Build Back Better," he said:

"So far, the policy failures from this administration have gushed like an open fire hydrant. You mentioned oil. The president is clearly obstructing America from drilling for its own oil, and for environmental reasons, he says.

"Instead, he wants us to buy oil from foreign countries. Those foreign countries transport that oil to us in tankers that use the 2,000 gallons of fuel per hour and emit eight tons of CO2 per hour. The irony is rich. I mean, that's a special kind of stupid.

On inflation...here's what the American people see. President Biden gave Americans three $600 stimulus checks. And then, for his next trick, he crashed their 401(k)s and increased their gasoline bills by $800, their food bills by $3,000, and their rent by $2,000 a month.

"Now, unless you have untreated mental illness, you know that is not a good trade. And that's why most Americans, at least on the economy, would -- right now -- would not trust the Biden administration to properly open a PayPal. Its economic illiteracy is astounding."

President Biden has blamed Vladimir Putin for rising fuel prices, which were rising even before Russia's invasion of Ukraine.

Biden's only solution so far is the release oil from America's Strategic Petroleum Reserve and -- as he said Monday in Tokyo -- "try to get the Middle Eastern countries, including OPEC, to raise their production of oil."

"Well, quite the opposite," Kennedy said. "President Biden says that he has no control over gasoline prices and oil prices. You can't have regulatory control over the drilling, transport, storage, refining, trading, and taxation of oil, as the president does, and accurately make that statement.

"And the American people just don't believe him, because it's just not true."