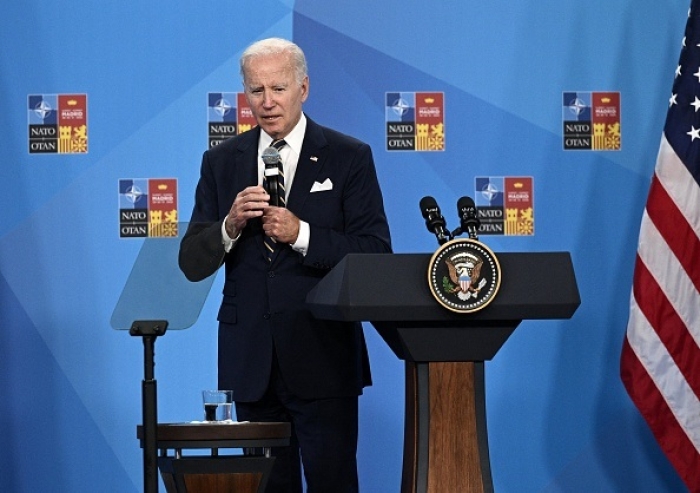 "This is appalling, Laura. First of all, the fact that he would go, while on foreign soil, and attack the Supreme Court of the United States to undermine it and to de-legitimize it is unpatriotic. I've never seen anything quite like it.

"Secondly, insofar as he's suggesting that they need to codify Roe, he's lying there. They don't merely want to codify Roe. What they want to do is pass a bill that would, in addition to codifying Roe, it would take the protections of Roe all the way up until the moment a child takes its first breath. So that no state anywhere could impose any kind of legal restrictions, any kind of protections for unborn human beings.

"So he managed to be at once entirely heartless toward the unborn, entirely in conflict with his own prior decisions, his own prior statements about abortion, well as a U.S. senator and otherwise, and managed to disrespect one of the great institutions of our system.

"Look, warts and all, the Supreme Court of the United States isn't a bad court. It is a good court. And the fact that it's run by mortal human beings means they sometimes make mistakes.

“They did not make a mistake with Dobbs. They corrected a mistake they had made 49 years earlier. This is unacceptable behavior. I don't know whether to chalk it up to incompetence, or avarice or both. But this is not going to fly with the American people."

"And so I'm going to be talking to the governors as to what actions they think I should be taking as well, and -- but the most important thing to be clear about is, we have to change -- I believe we have to codify Roe v. Wade in the law, and the way to do that is to make sure the Congress votes to do that.

Sen. Lee noted that the Democrats' call to scrap the filibuster conflicts with Joe Biden's earlier insistence that doing so would be a bad idea.

"This is not limited to their so-called attempt to codify Roe," Lee said.

Lee's new book is titled "Saving Nine: The Fight Against the Left's Audacious Plan to Pack the Supreme Court and Destroy American Liberty."

Lee said every time court-packing has been attempted in modern history, "it has ended badly for the American people, whether it succeeds or fails legislatively."