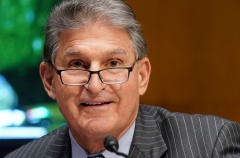 Senator Joe Manchin (D-W.Va.) says he won't vote for a $3.5 trillion bill. He has mentioned $1.5 trillion as an alternative. (Photo by LEIGH VOGEL/POOL/AFP via Getty Images)

Democrats hope to transform the country by passing a single, jam-packed bill with 51 all-Democrat votes. They insist that the $3.5 trillion bill pass before, or along with, a smaller, bipartisan infrastructure measure.

"I think Senators Manchin and Sinema should be commended for being independent minded and for being willing to look at this based on what they think is best for the country and their constituents,” Lee told Fox News's Maria Bartiromo on Monday.

And I think it's telling that their party is willing to beat them up for it and willing to even defend those who do horrible things to them in the process.

And look, the door's open. We'd love to have them join us on our side of the aisle, but regardless of whether that ever happens, I -- I hope and expect that they will continue to maintain their defiant willingness to stand up for the American people and those who elected them.

I, at the end of the day, think that Democrats will pass something, but I'm not sure what that looks like. It could be a lot better or a lot worse because of Senator Manchin and Senator Sinema's willingness to continue to push back. I hope they'll keep doing it, and I hope they will deny the Democrats this opportunity to pad their own political resumes at the expense of the American people.

"I mean, look, the legislation, both the Build Back Better piece, as well as the (bipartisan) infrastructure piece, are things that I wrote," Biden said. "These are -- these didn't come from, God love them, Bernie Sanders or AOC or anybody else. I wrote them."

Biden also slammed Republicans for making it difficult for Democrats to raise the debt ceiling, which -- along with the two "infrastructure" bills -- is an ongoing battle in Washington.

"Democrats do not need our consent to set a vote at 51 instead of 60," McConnell wrote. "Nonpartisan experts confirm that Senate Democrats have every necessary tool to pass a standalone debt limit increase through reconciliation and enough time to do it before late October. As I have warned for months, this is the path they will need to take."

Democrats object. “Going through the long, convoluted, difficult reconciliation process with debt limit is very, very risky,” Schumer said last month. “We’re not pursuing that.” Schumer wants to pass a straight bill hiking the debt limit without the impediment of a Republican filibuster. McConnell says no.

As McConnell wrote to Biden: “Congressional Democrats have wasted weeks complaining that this relatively brief (reconciliation) process would inconvenience their floor schedules...Republicans will not build Speaker Pelosi and Leader Schumer a shortcut around procedural hurdles they can clear on their own so they have a more convenient path to jam us with a partisan taxing and spending spree."

Sen. Lee noted that Democrats "do, in fact, have the ability to raise the debt ceiling without Republican votes. There's a simple procedure that they would have to follow to do it and yet they haven't done that. One has to ask the question, why?

"They're not willing to do what they know they want to do. They'd rather blame Republicans, and yet they don't need Republicans. Why is that? What's really going on here?" Lee asked.

According to the New York Times: "The reconciliation process would likely involve two marathons of politically charged votes that could extend for the better part of a day. Democrats say there is no guarantee that Republicans won’t drag those votes out to inflict procedural and political discomfort."