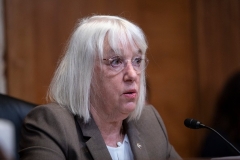 (CNSNews.com) - After the mass shootings in Buffalo and Uvalde, cries of "do something" echoed across the land.

Now lawmakers in both parties are taking credit for "doing something" -- supporting a gun-related "safe communities" bill that doesn't go far enough for Democrats, but goes too far for some Second Amendment advocates.

"Now, of course, this bill doesn't do everything we need, not by a mile," Sen. Patty Murray (D-Wash.) told a news conference on Wednesday. "[W]e are going to keep pushing for the kind of common sense gun safety reforms we know that the American people support."

Murray was one of several Senate Democrats at the news conference, all of them congratulating themselves on their bipartisan compromise ("a major step forward," said Senate Majority Leader Chuck Schumer).

"We all understand this is a compromise," Murray said:

"But make no mistake, the extreme option, the most unacceptable option is for us to do nothing, is for us to bury 19 kids and two teachers, and go right back to business as usual.

"That's why doing something matters. Thanks to Senator Murphy's leadership, Congress is doing something. We are going to pass several really meaningful steps that help address gun violence and will save lives. This will be the most comprehensive gun safety legislation we have passed in decades and we're going to pass it this week.

"Helping states implement the red flag laws, strengthening background checks on buyers under the age of 21, finally closing the boyfriend loophole to keep guns out of the hands of domestic abusers. That is progress and that matters. And importantly, we will invest in mental health to address the mental health crisis our country is facing and make sure people that everywhere, including survivors of gun violence, can get the care they need.

"These are good mental health investments that will help people and I hope to build on them in the bipartisan mental health package that Senator Burr and I are negotiating right now. But the gun violence crisis is a gun problem, not a mental health problem or a school problem for that matter, especially when mass shootings happen in so many other places and stores and concerts and houses of worship and even in health centers.

"This is a gun problem, plain and simple. And the answer is not to arm teachers or put guns in the classroom. That's why I am so glad we could secure a prohibition on using federal education dollars to purchase guns or to train educators in their use. It's just common sense. Now, this week, we are going to take our first meaningful steps we've ever taken on gun violence in decades.

"This week we are going to do something. We're going to pass legislation that will help save lives. Thank you."

"The most important part of this bill, as far as I'm concerned...is the language in there that talks about counseling and mental health and sitting down with young people and others who need a helping hand. That is going to prevent suicides. It's going to give people some new hope in life along with the red flag laws that may save lives," Durbin said:

"But when it comes to children, the gang-bangers on the streets of the city of Chicago, 90 percent of them have gone through a traumatic experience in their lives unimaginable to the rest of us. They need a helping hand. To ignore them is just to turn them free into the gang lands that dominate so many neighborhoods and more death.

"So the money that's available in these schools are going to counsel kids away from the worst instincts which they've developed in their traumatic lives. That is a step forward and I'm proud to be supporting it."

Sen. Schumer said he expects immediate passage of the bill.

Also See:
Democrat Sen. Chris Murphy Says Passing This Gun Bill 'Will Allow Us to Do More in the Future'