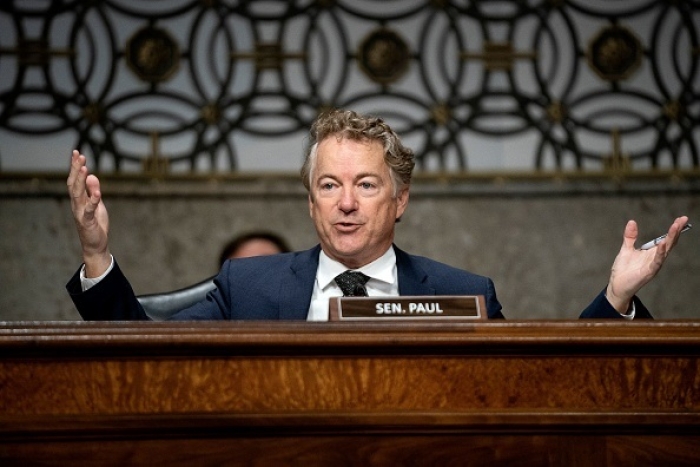 (CNSNews.com) - "My oath of office is to the U.S. Constitution, not to any foreign nation," Sen. Rand Paul (R-Ky.) said in a speech on the Senate floor Thursday, as some of his fellow Republicans urged immediate passage of a bill -- this one totaling $40 billion -- to fund U.S. assistance for the situation in Ukraine.

"We cannot save Ukraine by dooming the U.S. economy," Paul said, noting that inflation in the United States is now running at a forty-year high. "Inflation doesn't just come out of nowhere. It comes from deficit spending," he said.

Paul noted that is the second spending bill for Ukraine in two months, and it is three times larger than the first. Since 2014, he said, "the U.S. will have authorized roughly $60 billion in total spending for Ukraine."

Paul said the $60 billion far exceeds what the U.S. pays for cancer research, building roads and bridges, and even for some federal agencies. And he noted that other NATO allies are stepping up their Ukraine support, so the U.S. doesn't always need to be "the policeman that saves the world, particularly when it is on borrowed money."

In subsequent tweets, Paul said that while he sympathizes with Ukrainians, the $40 billion bill is "frankly a slap in the face to millions of taxpayers who are struggling to buy gas, groceries, and find baby formula." 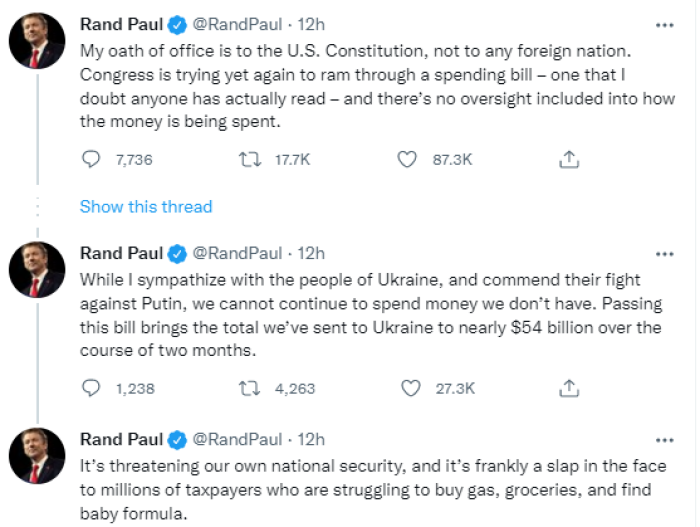 Also speaking on the floor Thursday, Senate Majority Leader Chuck Schumer (D-N.Y.) said Congress has a "moral obligation to stand with Ukraine." He urged Sen. Paul not to "stand in the way" with his "reckless demand" for changes that are not supported by Democrats.

Sen. John Tester (D-Mont.) told MSNBC's "Morning Joe" on Friday he thinks the bill will pass next week. "I mean, everything was ready to go. It is one of the problems with the U.S. Senate when you have one person that can obstruct everything," he said.

Sen. Paul reminded his fellow lawmakers on Thursday that the Soviet Union "collapsed in large part, not just because it was defeated militarily, but because it ran out of money. In an attempt to save Ukraine...will we doom the United States to such a future?" he asked.