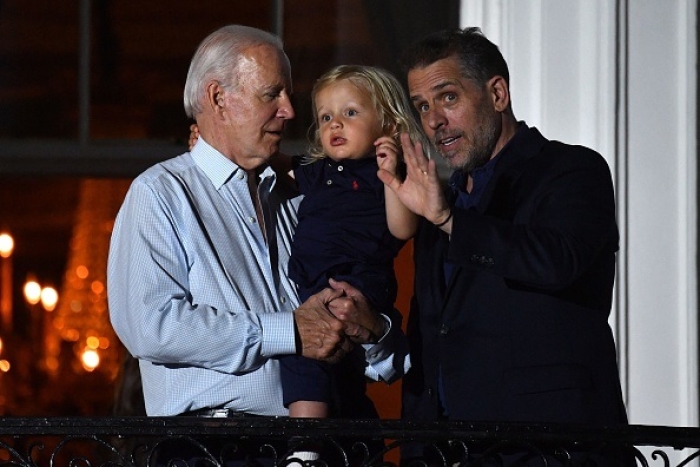 President Joe Biden holds grandson Beau Biden next to son Hunter Biden on a balcony of the White House to watch the fireworks on July 4, 2022. (Photo by NICHOLAS KAMM/AFP via Getty Images)

"I think the American people deserve the truth on this, because Joe Biden is certainly compromised. I heard your last segment there talking about Joe Biden's soft-on-China policies. There's probably a reason why Joe Biden canceled the China Initiative, which was (in) the Department of Justice a program to investigate Chinese theft of our intellectual property in our university systems.

"Why in the world would he cancel that? Is it because he knows that China knows all the transactions and exactly what Hunter Biden was involved in?" Johnson asked.

“So, no, this is a huge scandal. The American public deserves the truth, because it is putting at risk our national security, because we have a compromised president who has lied repeatedly to the American public, saying that he never talked to Hunter about his overseas business transactions.

"Now we actually have voicemails from off of these computers. And, of course, the -- my concern about all of this, in terms of our Department of Justice, is that, to the extent that they might indict Hunter, I'm afraid they will enter a plea agreement. And part of that plea agreement might be to seal the records, so the American public never knows the truth. That would be a travesty of justice," Johnson said.

President Biden's Justice Department announced on February 23, 2022 that the Trump administration's "China Initiative," implemented in 2018, had raised concerns among civil rights activists that the Justice Department was treating people from China or of Chinese descent differently.

"The rise in anti-Asian hate crime and hate incidents only heightens these concerns. The Department is keenly aware of this threat," Assistant Attorney General Matthew Olsen said in February.

"In light of these concerns, we began a review soon after I took office...While I remain focused on the evolving, significant threat that the government of China poses, I have concluded that this initiative is not the right approach. Instead, the current threat landscape demands a broader approach...to tackle the most severe threats from a range of hostile nation-states."

Fox News recently asked FBI Director Chris Wray if it was a mistake for the Biden administration to scrap the China Initiative: "We are not going to engage in profiling by ethnicity or national origin. And we haven't," Wray said.

"And we're going to work jointly with universities. In many cases, that's one of the most effective ways to prevent stealing of research."

Sen. Johnson on Sunday noted that the FBI has had Hunter Biden's laptop since December 2019.

"What have they been doing with it?" he asked.

"OK, to me, there seems to be all kinds of potential criminal activity on that computer.

“Our FBI, our Justice Department hasn't really done squat. They won't answer our questions about potential conflict of interests with people like Nicholas McQuaid, who -- and who heads up the Criminal Division. We -- they don't even let the U.S. attorney in Delaware answer our oversight requests in terms of, have people been -- recused themselves?

"So there's an enormous cover-up going on here. The FBI, the Department of Justice have not been forthright. I don't think they're rigorously investigating this. And, again, I'm concerned they will be involved in a cover-up as well. Even if they do indict, I fear they will seal the records. The American public will never get the full truth."

According to a bank records produced by Sens. Johnson and Chuck Grassley, Hunter Biden and James Biden, Joe's brother, worked with companies connected to China's communist regime to assist them in finding projects for global and domestic infrastructure and energy.

Meanwhile, President Biden is now debating whether to lift tariffs imposed on China by the Trump administration.

"Oh, we’re having further discussions on that," he told reporters on Sunday.