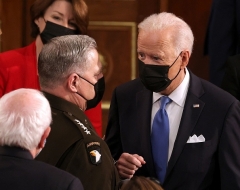 President Joe Biden speaks with the Chairman of the Joint Chiefs of Staff Gen. Mark A. Milley after addressing Congress on April 28, 2021. (Photo by CHIP SOMODEVILLA/POOL/AFP via Getty Images)

(CNSNews.com) - "You must immediately dismiss General Milley. America’s national security and ability to lead in the world are at stake," Sen. Marco Rubio (R-Fla.) wrote in a September 14 letter to President Joe Biden.

Rubio told the president he's gravely concerned by reports in the new book “Peril” that Joint Chiefs Chairman Mark Milley "worked to actively undermine" President Donald Trump -- then the sitting Commander in Chief -- "and contemplated a treasonous leak of classified information to the Chinese Communist Party in advance of a potential armed conflict” with China.

“These actions by General Milley demonstrate a clear lack of sound judgement, and I urge you to dismiss him immediately."

A new book by Washington Post reporters Bob Woodward and Robert Costa says Milley spoke with Chinese communist leaders, reportedly telling them: "You and I have known each other for now five years. If we’re going to attack, I’m going to call you ahead of time. It’s not going to be a surprise.”

"Even more egregiously," Rubio wrote, "reports indicate that General Milley interfered with the procedures by which the civilian commander-in-chief can order a nuclear strike. He purportedly instructed officials not to take orders without his involvement and forced them to take an oath to that effect.

“A senior military officer interfering with that civilian-controlled process is simply unacceptable at best, and at worst, would cause ambiguity which could lead to war.”

The Woodward/Costa book says Milley was so concerned about Trump's mental state following the election, that he was willing to put the military's judgement above that of the civilian commander in chief. "It is a dangerous precedent that could be asserted at any point in the future by General Milley or others. It threatens to tear apart our nation’s longstanding principle of civilian control of the military," Rubio wrote.

Appearing on Sean Hannity's show Tuesday night, Rubio wondered what would happen if General Milley decides that Joe Biden is incompetent: “Imagine if tomorrow General Milley decides, ‘I think Joe Biden is senile, so I won't follow his orders. I am going to collude with Russia or China to prevent him from acting.’  It is the essence of a military coup, for lack of a better term. That's what it would equate to.”

Rubio said he hopes the information contained in the book is not true:

"Tomorrow I honestly hope we will have a statement from General Milley saying this is an absolute lie and it never happened. The alternative is, we live in a country where a general can decide ‘I don't like what a president is doing. I don’t think the president is in his right mind. I will ignore his warning and collude with our enemies to prevent our president, elected by the people, from taking action.’

"By the way, in this case, there is no sign that the action he was trying to prevent was ever going to happen."

Rubio said anyone who worked with Donald Trump "knows that the notion that he would start a war anywhere in the world unnecessarily is just not realistic. He was the opposite. He wanted to avoid these conflicts and talked about it openly."