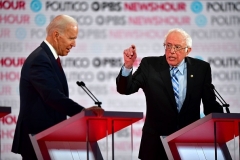 Joe Biden and Bernie Sanders at one of the Democrat primary debate s. (Photo by FREDERIC J. BROWN/AFP via Getty Images)

(CNSNews.com) - Sen. Bernie Sanders (I-Vt.) is not shy about his desire to be labor secretary in a Joe Biden administration.

In an interview with PBS's Judy Woodruff on Wednesday, Sanders said "yes" he accept that job, and he also plugged his "progressive economic agenda."

The working class of this country is in a lot of pain right now, unemployment very, very high. Wages are visibly low. We have unequal pay for equal -- for work. Women are getting paid much less. Workers can't form unions. People are not getting the overtime, they're not getting the pensions they are entitled to.

So I'm going to do whatever I can, whether in the Senate or wherever, in fighting for the rights of working families. If I am asked to become a member of the Biden administration, and if I'm given a portfolio that can make a difference to the working families of this country, would I accept it?

Asked if he has a "favorite" for treasury secretary, Sanders said, "there are a number of good candidates out there, but I think Elizabeth Warren has a track record of standing up to very powerful Wall Street interests. I think she knows the interests backwards and forwards. And I think she would be a very powerful secretary in the Treasury."

Sanders, who twice came close, but missed securing the Democrat presidential nomination, represents the far-left flank of his party:

Asked why Democrats lost seats in the House and have failed -- so far -- to take control of the Senate, Sanders said many Democrat candidates "focused on the need to defeat the most dangerous president in modern American history."

"But I don't think we did quite as good a job as we should have in speaking to working families, who today are in probably worse economic shape than any time since the Great Depression. And we did not make the case that we're prepared to take on powerful special interests, we're prepared to raise that minimum wage to at least 15 bucks an hour, provide equal pay for equal work, make it easier for workers to join unions, create millions of good-paying jobs rebuilding our crumbling infrastructure, making public colleges and universities tuition-free, expanding health care to all people.

"So, I think we probably were not as strong as we should have been in explaining what a progressive economic agenda would mean to working families throughout the country."

Sanders said all of those are "popular ideas."

I mean, the truth is that the American people understand that our current health care system is dysfunctional and cruel and wasteful. They understand that $7.25-an-hour minimum-wage is a starvation wage.

They understand that, in the richest country in the history of the world, it's insane that our infrastructure is falling about, that we are not addressing the existential threat of climate change.

Sanders said Democrats need to "make the case, outline the problems, then present the solutions. "And then you can sit down with Republicans and see where we go.

"Now, my hope is that, in early January, Democrats will pick up two more seats in the Georgia run-offs, and that will make our life a lot easier."