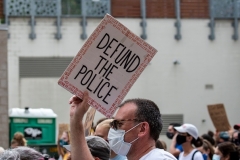 (CNSNews.com) - Sen. Tim Scott (R-S.C.) said he hears a lot of crazy things in Washington, but recent claims by Democrats that Republicans are defunding the police are the most absurd:

“The facts are simple,” Scott continued:

Seattle, Portland, Los Angeles, Cleveland and New York, all – Baltimore, all have defunded the police. What we've seen is a 40-percent increase in violent crime in major cities because the Democrats have been defunding the police for the last year-plus.

What we have -- what we have done on the other side, of course, is to refund the police. Even the police reform legislation I'm currently working on provides more money for officers because the last thing you can do is ask someone to go into the most dangerous places in our country without the resources and without covering their liability. If you don't do those two things, you can't ask good people to go into bad places to make them even better.

"Let's talk about who defunded the police," Richmond said.

"When we were in Congress last year trying to pass a rescue plan — I'm sorry, not the rescue plan but an emergency relief plan for cities that were cash-strapped and laying off police and firefighters — it was the Republicans who objected to it.

"And in fact, they didn't get funding until the American Rescue Plan, which our plan allowed state and local governments to replenish their police departments and do the other things that are needed," Richmond said.

"So look, Republicans are very good at staying on talking points of who says defund the police, but the truth is, they defunded the police, we funded crime intervention, and a whole bunch of other things."

Echoing Richmond, she also noted that the American Rescue Plan did not get a single Republican vote, even though President Biden and his fellow Democrats said the bill could "help ensure local cops were kept on the beat in communities across the country."

(The bill was a Democrat bailout for poorly managed cities. It was never promoted as a crime-fighting effort, and most police departments are funded by local jurisdictions anyway.)

Sen. Scott is among the lawmakers who have been working on a police reform bill, spurred by the murder of George Floyd more than a year ago.

"Well, we've agreed to the framework. So we know what's not in it, which is as important as what is in it. So there is a framework that has been agreed to, but the language itself is still being written.

Scott said individual officers will retain their qualified immunity, but aggrieved parties could "go after the jurisdiction."

“So, we're not doing this in a vacuum or a silo. I'm sure Corey's (Sen. Corey Booker) talking to the civil rights groups on the other side. But we're making sure that what we do protects the officer and the community that they serve. If you can't do both -- you shouldn't do either.”

"But the liberal elites in the Democrat Party want to make targets out of our law enforcement officers. It's our responsibility to stand in the gap, stand in the fire because they do that every single day for us, and we're going to do it for them," Scott said.