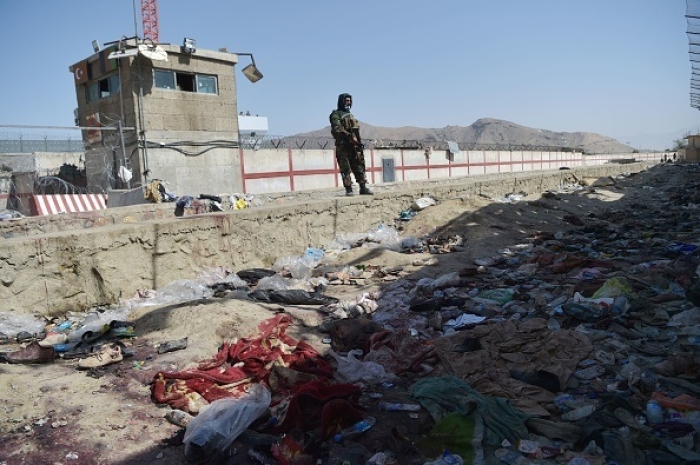 A Taliban fighter stands guard at the site of the August 26 twin suicide bombs, which killed scores of people including 13 US troops, at Kabul airport on August 27, 2021. (Photo by WAKIL KOHSAR/AFP via Getty Images)

(CNSNews.com) - As directed by Congress, the Office of the Special Inspector General for Afghanistan Reconstruction (SIGAR) has now made public its report on the collapse of the Afghan National Defense and Security Forces (ANDSF) in August 2021.

In the two decades of war, training, advising and mentoring, the report says, the United States provided the ANDSF over 600,000 weapons, 300 aircraft, 80,000 vehicles, communication equipment, and other advanced material, such as night vision goggles and biometric systems.

"The goal was to build an ANDSF that was independent, self-sustaining, and able to defend against internal and external threats. However, the ANDSF collapsed in August 2021, following the U.S. decision to withdraw from the country.”

The IG identified six factors that accelerated ANDSF's collapse, and the "single most important near-term factor" was the U.S. decision to withdraw the U.S. military and contractors from Afghanistan through the U.S.-Taliban agreement signed by the Trump Administration in February 2020 and confirmed by President Biden in an April 2021 address to the nation.

"Many Afghans thought the U.S.-Taliban agreement was an act of bad faith and a signal that the U.S. was handing over Afghanistan to the enemy as it rushed to exit the country; its immediate effect was a dramatic loss in ANDSF morale," the report says.

"Other factors contributing to the ANDSF’s collapse included the change in the U.S. military’s level of support to the ANDSF; the ANDSF never achieving self-sustainment; Afghan President Ashraf Ghani frequently changing ANDSF leaders and appointing loyalists; the Afghan government’s failing to take responsibility for Afghan security through an implementation of a national security strategy; and the Taliban’s military campaign effectively exploiting ANDSF weaknesses.

"These six factors were intertwined and worked together to end with the ANDSF’s collapse," the report said.

The IG also identified eight factors that explain why -- after 20 years and nearly $90 billion in U.S. security assistance -- the ANDSF was ill-prepared to sustain security following a U.S. withdrawal.

"(1) no country or agency had complete ownership of the ANDSF development mission, leading to an uncoordinated approach;

"(2) the length of the U.S. commitment was disconnected from the reality of the time required to build an entire security sector;

"(3) the U.S. created long-term dependencies that would require significant time to overcome, such as providing the ANDSF with advanced equipment they could not sustain and leaving them out of the equipping process;

"(4) the U.S. military, driven by political deadlines, struggled to balance winning battles with letting the ANDSF gain experience by fighting on their own;

"(5) U.S. metrics created to measure the development of the ANDSF were unable to effectively measure ANDSF capabilities;

"(8) the U.S. and Afghan governments failed to develop a police force effective at providing justice and responsive to criminal activities that plagued the lives of Afghan citizens."

SIGAR says this is an interim report, the findings of which were relayed to members of various House committees in March. "We plan to issue a final report in fall 2022, which will include an assessment of the relative success and failure of the U.S. mission to reconstruct the ANDSF," SIGAR said.

The report makes no recommendations.