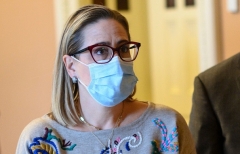 (CNSNews.com) - "I rise at a challenging time for our nation," Sen. Kyrsten Sinema (D-Ariz.) said in a speech on the Senate floor that ended Democrats' hopes for passage of their federal voting legislation.

Although Sinema made it clear that she supports the Democrats' John Lewis Voting Rights Advancement Act and The Freedom to Vote Act, she does not support the way Democrats intended to pass them -- by scrapping the 60-vote Senate filibuster.

"Threats to American democracy are real," Sinema said. "I share the concerns of civil rights advocates and others I've heard from in recent months about these (Republican) state laws. I strongly support those efforts to contest these laws in court and to invest significant resources into these states to better organize and stop efforts to restrict access at the ballot box..."

Sinema said the two bills treat "symptoms" of the disease, but not the disease itself: "And while I continue to support these bills, I will not support separate actions that worsen the underlying disease of division infecting our country."

“There is no need for me to restate its role protecting our country from wild reversals in federal policy. It is a view I’ve held during my years serving in both the U.S. House and the Senate, and it is the view I continue to hold.  It is the belief that I have shared many times in public settings and in private settings."

Sinema said she's had conversations with senators of both parties on ways to make the Senate "more productive, more deliberative, more responsive to Americans' needs, and a place of genuine debate about our country's pressing issues."

She said the harried discussions of the past week are a "poor substitute" for "what should have been a thoughtful public debate" that could have happened any time over the last year.

"Such a discussion is still a worthy goal," she said. "But a discussion of rules falls short of what is required."

Given the cyclical nature of American politics, where power shifts from side to side, the Senate filibuster has "proved maddening" to all lawmakers in recent years, Sinema noted, depending on which party controls the Senate.

"But what is the legislative filibuster other than a tool that requires new federal policy to be broadly supported by senators representing a broader cross section of Americans -- a guardrail inevitably viewed as an obstacle by whoever holds the Senate majority, but which in reality ensures that millions of Americans represented by the minority party have a voice in the process.”

Calls to do away with the filibuster stoke resentment and anger in the Senate and among constituents, she said.

"Eliminating the 60-vote threshold on a party line with the thinnest of possible majorities to pass these bills that I support will not guarantee that we prevent demagogues from winning office." She said eliminating the 60-vote threshold "will simply guarantee that we lose a critical tool that we need to safeguard our democracy from threats in the years to come.”

Sinema warned against party control becoming a goal in and of itself instead of lawmakers finding "appropriate balance in which Americans' diverse views and shared values are represented.

“But when one party need only negotiate with itself, policy will inextricably be pushed from the middle towards the extremes. And I understand there are some on both sides of the aisle that prefer that outcome, but I do not..."