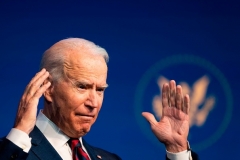 President-elect Joe Biden introduces some of his key Cabinet nominees and members of his climate team in Wilmington, Delaware on December 19, 2020. (Photo by ALEX EDELMAN/AFP via Getty Images)

(CNSNews.com) - Kate Bedingfield, the incoming White House Communications director, on Sunday outlined President-elect Joe Biden's plans to "roll back some of the most egregious moves of the Trump administration."

In the same interview with ABC's "This Week," Bedingfield said Biden's Inaugural Address on Wednesday will be one of a "unified America."

So I think what you'll hear from President-elect Biden on Wednesday will be a reflection of a lot of what you heard from him on the campaign trail, which is that he believes we can bring this country together. He believes that we have to bring this country together, that a unified America is the only way that we're going to be able to tackle the massive crises that we're grappling with.

I won't go too much farther in terms of previewing the speech, because I'll let the president-elect speak to it on Wednesday, but I think you can expect that this will be a moment where President-elect Biden will really work to try to turn the page on the divisiveness and the hatred over the last four years and really lay out a positive, optimistic vision for the country, and lay out a way -- lay out a path forward that really calls on all of us to work together.

I think that's what Americans all across the country want. They want a government that once again is focused on doing the right thing by them, and helping them in their day-to-day lives, and so you're going to hear President-elect Biden really lay out a vision to get us to a place where we can work together because that's what Americans want.

That's what they voted for in this election, 81 million Americans voted for President-elect Biden, in part, because he was laying out a vision for this country that gets us to a place where we can work together. So you'll hear a lot of that from him on the 20th.

Bedingfield said Biden, from the first moments of his presidency, will "take decisive steps to roll back some of the most egregious moves of the Trump administration. And he's going to take steps to move us forward."

She outlined some of his plans, as follows:

So, over the course of the first week-and-a-half, he's going to do everything that he can within his power to move us forward.

This is a plan to get desperately needed direct relief to people who've been hardest hit by this crisis all over the country. And it's an effort to fund a coordinated federal vaccine effort.

It's an effort to get shots into American arms to ensure that we can once and for all finally get this virus under control and get our economy back on track.

Bedingfield said she expects Biden to take the oath of office outside, on the west front of the Capitol, in a heavily fortified city, now closed to most American citizens.

"Well, that is certainly our plan," she said. "I think that will send an incredibly important visual image to the world about the resilience of American democracy, and so our plan and our expectation is that President-elect Biden will put his hand on the Bible with his family outside on the west side of the Capitol on the 20th."

Bedingfield also said the Biden team is "preparing for any scenario that should arise after noon on January the 20th...but we have full faith in the United States Secret Service and their partners who've been working for over a year on the planning to ensure that this event is safe.

"So we're very much looking forward to President-elect Biden putting his hand on the Bible at noon on the 20th."