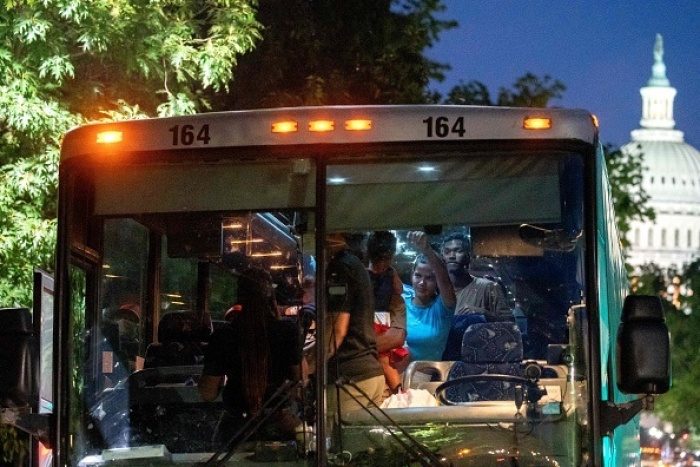 Migrants from Venezuela, who boarded a bus in Del Rio, Texas, disembark within view of the US Capitol in Washington, DC, on August 2, 2022. (Photo by STEFANI REYNOLDS/AFP via Getty Images)

(CNSNews.com) - Thousands of illegal aliens have come, and thousands more will be coming to the nation's capital, says Texas Governor Greg Abbott.

Texas and Arizona, overwhelmed with illegal border-crossers, are giving them one-way bus tickets to Washington, D.C., until the neglectful Biden administration "does its job" by stopping the cross-border crush.

"But this just shows the hypocrisy of these liberal leaders up in the Northeast who think that border crisis created by Joe Biden, that's fine as long as it's Texas that has to deal with it.

“But as soon as they have to deal with the real consequences of Biden's border caused crisis, they are up in arms, calling for the National Guard -- as you point out, dealing with just a tiny fraction of what we have to deal with every single day.

“We're going to keep sending those buses up there until they fully understand and most importantly -- until the Biden administration does its job to enforce the laws concerning the border."

Press reports say D.C. Mayor Muriel Bowser has asked for National Guard assistance in managing the migrants, because volunteer aid workers cannot keep up with the numbers -- some 200 busloads, or 4,000 migrants so far.

“Our ability to assist people in need at this scale is very limited,” Bowser wrote to the Biden White House, according to a letter obtained by the Hill. “Instead of rolling up their sleeves and working with the Biden/Harris Administration on a real solution, Governors Abbot and Ducey have decided to use desperate people to score political points.”

The Washington Post reported last week that Washington-area shelters are running out of room, leaving some of the migrants to sleep at Union Station.

But Abbott says it's only fair to share the burdens being placed on his constituents:

"So because of the increased influx of people coming into our state and because what the Border Patrol is doing -- they're just processing the paperwork of these people coming here illegally and dumping off these immigrants into our small, local communities.

“We're helping out these small local communities by sending even more buses to these communities and putting these new migrants on the buses and sending them to Washington, D.C.

"And, we're looking at other cities to send them to," Abbott said.