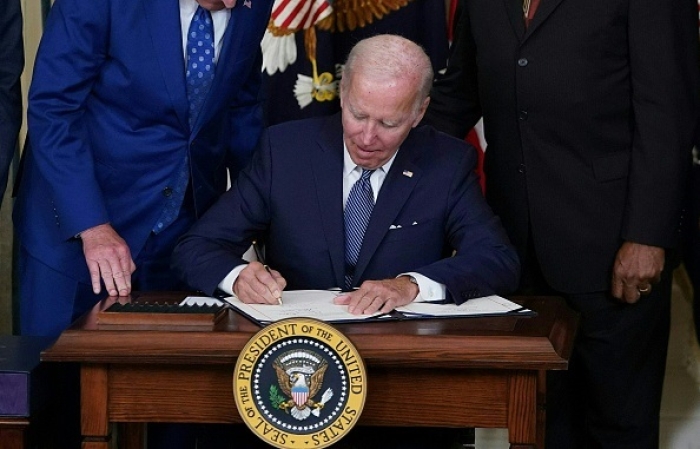 President Joe Biden signs the Inflation Reduction Act of 2022 into law during a ceremony at the White House on August 16, 2022. (Photo by MANDEL NGAN/AFP via Getty Images)

(CNSNews.com) - In remarks at the White House on Tuesday, President Joe Biden said the Democrats' so-called Inflation Reduction Act "is the biggest step forward on climate ever — ever — and it’s going to allow — it’s going to allow us to boldly take additional steps toward meeting all of my climate goals — the ones we set out when we ran."

Following up on those remarks Wednesday, White House Chief of Staff Ron Klain used the word "transformative" to describe what's in the Democrats’ latest tax-and-spend bill:

"Look, I think on climate change, what is indisputable is it's the largest investment we've ever made in moving our country to a clean energy economy,” Klain said:

“We're going to really create 9 million jobs, not just deploying clean energy, but making it here in America. That's going to be transformative.”

“The president didn't put up the mission accomplished banner yesterday at the White House. What he said was that for the first time in decades, we're passing legislation that stands up to the special interests, that beats the climate deniers, that beat the big corporate interests to raise taxes on corporations that pay nothing in taxes, that beat Big Pharma to give people help with their prescription drug bills, and down the line.

“And that's a significant accomplishment, not just in and of itself, but because we're showing that leadership at the White House, with support on Capitol Hill, can turn the tide against some of these special interests that's locked up the Congress for so long.”

Klain said it's important to "tell the American people what this bill and the bills that we've recently passed are going to do for them."

He said the White House is organizing a "three-week crash effort" to spread the word by sending administration officials, including the president and vice president, all over the country.

And, by golly, those officials won't just talk about it -- they'll "show it in action, to show the progress we've made," Klain said.

“And we'll culminate all of that with a big event here in the White House on September 6th, the day after Labor Day, talking about the benefits of the bill, celebrating its passage, celebrating its significance.

“I agree, we have an obligation, our most important obligation, of course, is to push to get this kind of legislation passed, but we also have an obligation to explain it to people, explaining to them how to get the benefits of it, how to make it worthwhile and meaningful in their lives, and we're going to be doing that as well.”

Klain, asked about Biden's tanking poll numbers, noting that it may "take a while" for people to "appreciate" Biden's legislative accomplishments:

“And I think, obviously, we have a measuring stick of that coming in November, and I think you're going to see the American people respond to that."

For the record, President Biden said in his March 2022 State of the Union Address that his administration will "build a national network 500,000 electric vehicle charging stations” across the country, using money from the bipartisan infrastructure law he signed in November. But that hasn't happened yet.