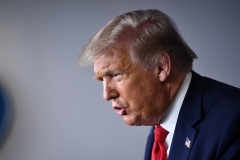 President Donald Trump speaks to the press at the White House. (Photo by Brendan Smialowski/AFP via Getty Images)

(CNSNews.com) - Asked if he has any "words of encouragement" for middle- and high-school students forced into online classrooms, President Trump on Wednesday thanked the reporter for asking "such a fair question, such a good question."

"I feel very badly for them," Trump said. "And I have a feeling that on November 4th, somebody is going to announce schools are open. The country is open. Everything is open. I really believe a lot of it is done for political reasons, if you want to know the truth. I think so.

Trump spent a good part of his Wednesday news conference talking about the need for schools to reopen:

"All schools should be making plans to resume in-person classes as soon as possible," Trump said.

Today I am pleased to announce that we will provide up to 125 million reusable masks to various school districts all around the country. My administration also stands ready to deploy CDC teams to support schools that are opening and schools that need help in safety and in order to safely reopen.

Finally, today, my administration is highlighting general recommendations for all schools and guidance to protect high-risk teachers and students. We are working very, very closely with many of the schools and school districts throughout the country.

They include the following--to ensure all students, teachers and staff understand the symptoms of the China virus.

Trump said all students, teachers, and staff should stay home if they are sick; he urged frequent handwashing or hand sanitizing during the school day, beginning with entry into the school building; and he said handwashing facilities should be widely available throughout the school.

Trump said large gatherings should be minimized and held outdoors whenever possible; he said classroom windows and doors should be left open, with fans and air conditioning circulating the air; he urged social distancing, especially around high-risk people; and wearing masks.

Trump also said he wants money for schools to "follow the child, so that that if the school is closed, the family can go to another school, maybe in another area but they can do it, and we would like to make that payment.

"Rather than paying a school that's closed, we'd rather pay directly--we're following the child. Where the child goes. And we want to pay the family, pay the child, and then the family can take care of the cost.

"And we are trying to get that approved, too, but the Democrats don't like doing anything unless it means doing for the union, which controls Nancy and controls Chuck 100 percent."

Earlier, at a White House roundtable on education, Trump asked one of the participants, "So sitting in isolation with a computer, looking at a laptop, is not the same as being out there in the real world?"

Paul Peterson, an education policy wonk, replied, "You know at one time, Mr. President, I thought digital learning was the future. But we have learned through this COVID crisis that we haven't got digital learning to the point where you can really engage young people. They've got to be in that classroom. They have to be with their peers."

Trump again: "So if you're a presidential candidate and you're sitting in a basement and you're looking at a computer, that's not a good thing? (Laughter) Sounds like it would be the same," the president said.