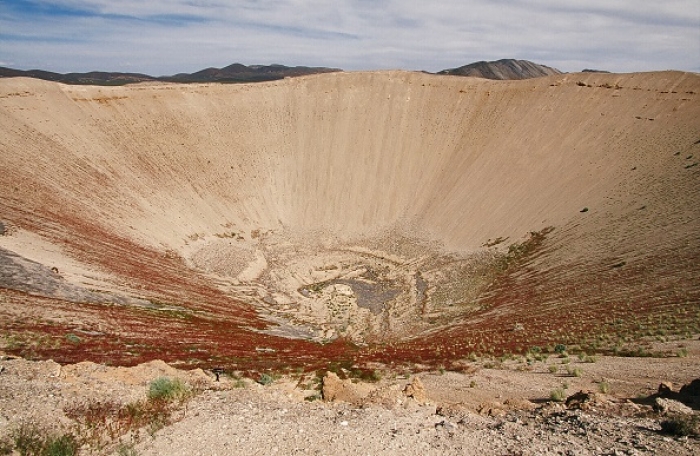 A crater from a detonated nuclear bomb located inside a Nevada nuclear test site named Doom Town. Several open air nuclear test were deployed on Doom Town in the 1950s to test the effect of nukes on American communities. The furnished homes were inhabited by mannequins. (Photo by Ted Soqui/Corbis via Getty Images)

(CNSNews.com) - On February 27, day four of his war on Ukraine, Russian President Vladimir Putin ordered Russia's military to put its nuclear weapons on "special alert," given what he called "aggressive statements" from NATO nations.

His "special alert" announcement came a week after Putin warned that any nation interfering in his attempt to retake Ukraine would produce consequences "you have never seen in your history."

At a hearing of the House intelligence committee on Tuesday, Director of National Intelligence Avril Haines said Putin's nuclear "saber-rattling" was "extremely unusual." And she, along with CIA Director William Burns and Defense Intelligence Agency Director Scott Berrier all agreed that the nuclear threat "is increasing."

Rep. Mike Turner (R-Ohio) asked Haines, Burns and Berrier if they believe that if the U.S. and NATO entered the conflict to protect Ukraine "that he (Putin) would be willing to escalate this conflict to a nuclear conflict?"

"We obviously take it very seriously when he's signaling in this way," Haines responded. "But we do think, as I indicated, such that -- that he is effectively signaling that he's attempting to deter...and that that's been his main purpose in doing so.

"And, you know, again as indicated, we're watching very closely for movements, anything related to his strategic nuclear forces, and we're not seeing something at this stage that indicates that he is doing something different than what we've seen in the past."

Burns noted that "Russian doctrine holds that, you know, you escalate to de-escalate." Burns said Putin might consider the use of tactical nuclear weapons, but "only in that specific circumstance that you described, of a direct military conflict between NATO and Russia."

Berrier told the committee, "Putin has invested very wisely in these niche weapons, and you -- you mentioned some of them in your opening statement. I -- I believe that he thinks that gives him an asymmetric advantage. And he's also invested in tactical nuclear weapons.

"I also believe that, when he says something, we should listen very, very carefully and maybe take him at his word. So, this question is the one that analysts are pondering right now, and I -- I think we -- we really need to do some more work on it."

Rep. Turner noted that the Biden administration is currently evaluating its nuclear capabilities and its nuclear strategy. The Nuclear Posture Review, as it is called, is due out this year, and according to the Defense Department, "The review will also examine how the United States can take steps to reduce the role of nuclear weapons in its national security strategy while ensuring the strategic deterrent remains safe, secure and effective and that the extended deterrence commitments to its allies remain strong and credible."

Rep. Turner asked the intelligence officials what they would advise, "knowing that we now have authoritarian regimes that are making...open statements about threatening their neighbors, the use of nuclear weapons..."

Haines said she is involved in the Nuclear Posture Review but doesn't provide advice -- she provides "the intelligence community's assessments."

Turner asked her if she assesses "that the threat is increasing?"

"That the threat is increasing generally, yes, I think that's fair," Haines said.

"I absolutely agree that the threat is increasing," CIA Director Burns said, "and I think our role is to try to provide insight from the intelligence community, into the plans, the ambitions, the pace at which, you know, adversaries, whether it's China or Russia, can move on these issues. And all I would add had is that I think it's very important for us not to underestimate the pace -- either the scope of those ambitions or the pace at which they can move. I think China and hypersonics is one example of that."

"Ranking Member, I do believe that the threat is increasing, Berrier said. "We are involved in the study, and -- and our role is to -- is to really provide the best foundational military intelligence we have related to these kinds of weapons, facilities, organizations, and doctrine that we can, so that policymakers can -- can make the right decision."

Haines, in her opening statement, noted that the U.S. has not heard the Russians announce a heightened nuclear alert status since the 1960s, but we also have not observed force-wide nuclear posture changes that go beyond what we have seen in prior moments of heightened tensions during the last few decades.

"Our analysts assess that Putin's current posturing in this arena is probably intended to deter the West from providing additional support to Ukraine as he weighs an escalation of the conflict.

"Putin probably still remains confident that Russia can militarily defeat Ukraine and wants to prevent Western support from tipping the balance and forcing a conflict with NATO. Regardless, our number one intelligence priority is defense of the homeland, and we will remain vigilant in monitoring every aspect of Russia's strategic nuclear forces," Haines said.