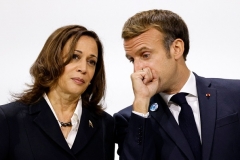 (CNSNews.com) - Vice President Kamala Harris, speaking at the Paris Peace Forum on Thursday, focused on what she called the "dramatic rise in inequality" -- gaps between the rich and the poor that she says were made worse and more visible by the global coronavirus pandemic.

She called the pandemic "an opportunity" to address those gaps.

Then, at a news conference on Friday, Harris said she and other world leaders discussed "what should be the norms and the rules of the 21st Century."

"We all know that this is a pivotal moment in the history of our world," Harris said on Thursday:

"We are nearly two years into a global pandemic -- five million lives lost. Countless livelihoods have been lost. But the pandemic has also presented us with an opportunity -- an opportunity, because many in our world, who perhaps did not see, now clearly see the gaps. And the call for leaders to bridge the gaps is rightfully growing more urgent and more insistent."

Harris said leaders must not resign themselves to inequality by saying it's always been this way. "We must instead agree that these growing gaps are unacceptable, and we must agree to work together to bridge them."

'Beginning of a new era'

Today, at a news conference marking the end of her visit to Paris, Harris said it's up to the United States and its partners and allies to "focus on what should be the norms and the rules of the 21st century."

"We are at the beginning of a new era, as highlighted by the pandemic, to be sure. But also marked by the increasing awareness...of the climate crisis and immanency of that and the urgency of this moment. Technology, what it has done in terms of creating opportunities but also creating real concerns about security.

"We are at the beginning of a new era," Harris repeated.

"In fact, this is something that President Macron and I talked about extensively. And in, then, this moment for nations who are partners and allies, we must together -- work together, to see where we are; where we are headed; where we are going in our vision for where we should be; but also see it as a moment, yes, to together address the challenges and to work on the opportunities that are presented by this moment.

"So that was in many ways the theme of this visit," Harris said.

"It was to also discuss, in particular with President Macron and our friends and allies in France, what we must do collectively with our other partners and allies to address and to focus on what should be the norms and the rules of the 21st Century."

Harris said her conversations with Macron and other world leaders touched on global health and preparing for the next pandemic; and the opportunities presented by space exploration and "establishing universal norms around what will be the behaviors in space and how they will be interpreted by all nations."