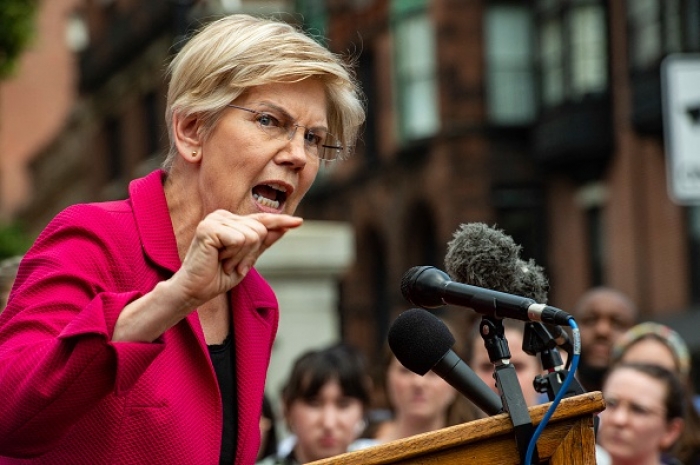 "I believe we need to get some confidence back in our court, and that means we need more justices on the United States Supreme Court," Warren said. "It's happened before. We've done it before. We need to do it again."

Host Martha Raddatz asked Warren why decisions about abortion shouldn't be left to the states, as the Supreme Court has ruled:

"Look, we have never left individual rights to the states," Warren said:

"The whole idea is that women are not second-class citizens. And the government is not the one that will decide about the continuation of a pregnancy. You know, there's no equivalent there for men. So what we believe is that access to abortion, like other medical procedures, should be available across the board to all people in this country.

"Now, we've got a lot of things on our agenda right now. First of all, we need to help the women who are pregnant right now and need help. And that means sending resources to the states like New Mexico, you know, that border other states that are going to try to help out.

“It means getting involved by volunteering, by sending money. It also means asking the president of the United States to make abortion as available as possible with the tools he has, including medication abortion, including using federal lands as a place where abortions can occur.

"But it's also focused like a laser on the election in November. And we get two more senators on the Democratic side, two senators who are willing to protect access to abortion and get rid of the filibuster so that we can pass it."

Even before the Supreme Court overturned Roe v. Wade, sending abortion decisions back to the states, a group of Democrat senators, including Warren, sent a letter to President Joe Biden outlining six things he should do "to protect the right to abortion."

In that June 7, 2022 letter, led by Warren and Sen. Patty Murray (D-Wash.), the 25 Democrats "encouraged" Biden to "consider the following ideas."

2. "Providing resources for individuals seeking abortion care in other states," including "vouchers for travel, child care services, and other forms of

support for individuals seeking to access abortion care that is unavailable in their home state."

3. Establishing a reproductive health ombudsman at the Department of Health and Human Services to "educate the public and analyze data collected by HHS about access to reproductive services."

5. "Clarifying protections for sensitive health and location data. HHS’s Office for Civil Rights could clarify how websites or mobile applications that collect information related to reproductive health (such as period trackers) should protect personally identifiable information and other sensitive data, especially given the risks presented by the sale of this data in states that criminalize reproductive decision-making."

6. "Using federal property and resources to increase access to abortion...especially in states where such services are limited by state law or regulation." This includes ensuring that military families "can access reproductive health care when they need it" and having the federal Office of Personnel Management "explore requirements that all federal employees are provided paid time off and reimbursement for expenses necessary to access abortion."