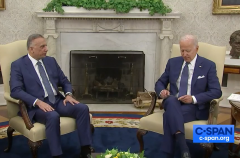 (CNSNews.com) - "Well, I'm honored to welcome the prime minister," President Biden said at the start of a photo opportunity at the White House on Monday. He addressed Iraqi Prime Minister Mustafa Al-Kadhimi as "Mr. Prime Minister," saying the name "Kadhimi" only once, in response to a question.

"We've known each other for some time. And welcome to the White House. Welcome to the Oval, Mr. Prime Minister."

Biden, reading from his notecards, said he's been "engaged deeply in Iraq for my entire career," and he said his administration is "committed to strengthening that partnership," even as the U.S. shifts from a combat mission in Iraq to an advisory role.

Speaking in nice-nice generalities is typical of these Oval Office photo-ops, but this  president couldn't do it without written assistance, as the video shows. Here's what Biden said, er, read:

(Note: The White House YouTube video zoomed in on Biden shortly after he began reading from his notes, showing just Biden's bowed head. But CSPAN video maintained its wide shot, clearly showing Biden reading, and that's what we replay here.)

Iraq has been a vital partner for the--partner for the United States for some time now in the Middle East and we've been--I've engaged deeply in Iraq for my entire career, back in the Senate, as vice president, and as president.

And I've worked with Iraq to, ah --and matter of fact, my son Beau was in Iraq for a year with the Ameri--with the Army National Guard. And the sacrifices that so many--so many have made to build the U.S.-Iraq partnership has been real and it's consequential. And my administration is committed to strengthening that partnership, Mr. Prime Minister.

And the U.S.-Iraqi Strategic Dialogue is about commitments that expand our cooperation on issues like health care, climate, energy, for--a matter of fact, I want to tell you, I was told you--that half a million--500,000 doses of COVID vaccine we're sending. I was told--you were told they wouldn't come for a while. They'll be there in a couple of weeks. They'll be there quickly.

And--and, ah, you know, we support strengthening Iraqi democracy, and we're anxious to make sure the election goes forward in October. And we're also committed to our security cooperation.

Our--our shared fight against ISIS is critical for the stability of the region. And our counterterrorism cooperation will continue even as we shift to this new phase we're going to be talking about. I'm looking forward to consulting with the prime minister today. We have a lot to talk about. He's been a good friend, and I'm anxious to get going. The floor is yours, sir.

In response to a question about how the U.S. relationship with Iraq may change -- and how many U.S. troops will remain in Iraq by year's end -- Biden couldn't, or didn't, answer the question:

"Well, we've been talking a lot. Our foreign ministers, our cabinet members have been talking. We're looking forward to seeing an election in October. We're working very hard with the Iraqi government to make sure the U.N. and the GCC are--we have oversight, that there's--these are full and fair elections," Biden said.

"I've been--I've been in contact with Kadhimi. Ah, ah, I have--anyway. I think things are going well. Our role in Iraq will be as a--dealing with not--it's just to be available to continue to train, to assist, to help, and to deal with ISIS as it--as it arrives. But we're not going to be, by the end of the year, in a combat mission."

In response to another shouted question about the Veterans Affairs Administration requiring masking for all employees, Biden told NBC's Kelly O'Donnell, "You are such a pain in the neck, but I'm going to answer your question because we've known each other for so long. It has nothing to do with Iraq. The answer--

"No. I'll answer your question. Yes, Veteran Affairs is going to, in fact, require that all docs working in that--in facilities are going to have to be vaccinated."

Biden didn't refer to his written notes to answer that question.