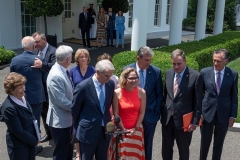 A bipartisan group of senators gather after their meeting with President Biden to discuss an infrastructure deal on June 24, 2021 at the White House. (Photo by JIM WATSON/AFP via Getty Images)

(CNSNews.com) - How hard is it for Democrats to support a "bipartisan" infrastructure bill when items omitted in that bill will just be wrapped into a second, much larger "human infrastructure" bill that Democrats are now writing?

On Friday, Sen. Chris Coons (D-Del.) told CNN he would support the bipartisan bill, even if funding for mass transit -- which he favors -- is dropped.

Coons said he would support the bipartisan bill because "it will create great high paying, high-skilled jobs and make our country competitively globally and will also show President Biden's deep commitment to working across the aisle to deliver real results the American people could see."

Asked if he thinks transit funding will be omitted from the bipartisan bill, Coons said he doesn't know.

But he said the "White House was actively engaged" in the discussions. And --"because we are also going to be moving a large reconciliation bill, there will be a second opportunity for us later in the year to invest in transit. Transit is something we all need across this country, but particularly in communities here in the Philadelphia suburbs, where it is how people connect to their employment every day."

Host Dana Bash noted that House Speaker Nancy Pelosi (D-Calif.) has said several times that the House won't take up the bipartisan bill until the Senate passes the $3.5 trillion reconciliation bill, which requires only 51 votes to pass and therefore could be done without a single Republican vote.

"Well," said Coons, "it's been clear from the majority leader, from Chuck Schumer for weeks, that before we can leave for the August recess, the Senate is going to have to take up and pass both this bipartisan infrastructure bill, and the budget bill that will begin the process of this reconciliation package. That will go on for several months more.

"But I think it's appropriate that we're trying to pass as much as we can of President Biden's bold plan, both for building physical infrastructure and for providing the investments that will reduce costs for working families across our country, costs from things like day care and child care --the cost of community college and drug prices. But also provide real investment to strengthen our recovery. I think we can get both of those done.

"But the next two weeks are critical, Dana. We're going to have to bear down, negotiate in good faith and move forward with these two bills."

The $3.5-trillion bill contains most of the liberal, big-government Democrat agenda, and many Democrats are willing to jam it through the evenly divided Senate without any Republican support. But they can always point to the smaller, compromise bill as evidence of "bipartisanship."

Repeating what Coons said: Passage of the compromise bill will show “President Biden's deep commitment to working across the aisle to deliver real results the American people could see."