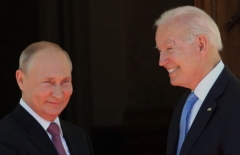 (CNSNews.com) - The United States ran a record February merchandise trade deficit of $2,080,300,000 with Russia, according to newly released numbers from the Census Bureau.

Russia launched its invasion of Ukraine on February 24.

That is the largest trade deficit the United States has ever run with Russia in the month of February. (The Census Bureau has published monthly U.S.-Russia trade numbers going back to 1992, the year after the collapse of the Soviet Union.). 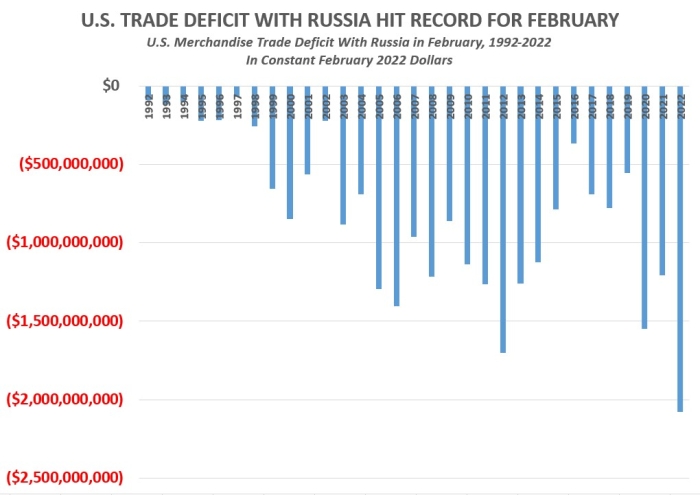 The third largest trade deficit the United States ran with Russia in the month of February occurred in February 2020, when it was $1,549,990,000 (in constant February 2022 dollars). 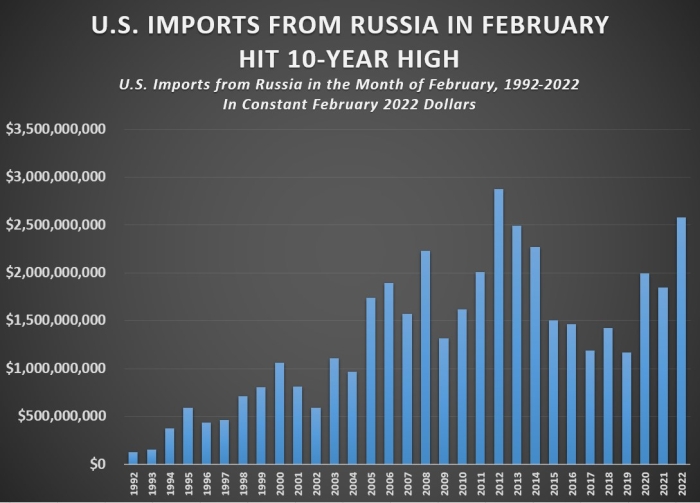 According to a timeline published by the Peterson Institute for International Economics, the Biden Administration imposed its first Ukraine-war-related sanctions on Russia on Feb. 21, 2022.

“In response to Putin’s decrees, the Biden administration issues an Executive Order (EO 14065) stopping new U.S. investment in, U.S. exports to, or U.S. imports from the regions,” says the PIIE timeline.

According to the PIIE timeline, it was not until March 8 that the United States banned Russian oil imports.

In 2021, according to the U.S. Energy Information Administration, the United States imported an average of 624,000 barrels per day of Russian crude oil and petroleum products—which set an annual record for U.S. imports of Russian petroleum imports.

(Historical dollar numbers in this column have been adjusted into constant February 2022 dollars using the Bureau of Labor Statistics Inflation Calculator.)