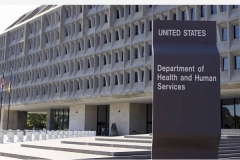 (CNSNews.com) - A record 81,046,488 people were enrolled in Medicaid and the Children’s Health Insurance Program (CHIP) as of February, according to data released this month by the Centers for Medicare and Medicaid Services (CMS).

“Medicaid was enacted in 1965 as part of the same law that created the Medicare program,” says the Congressional Research Service.

It “is a joint federal-state program that finances the delivery of primary and acute medical services, as well as long-term services and supports (LTSS) to a diverse low-income population, including children, pregnant women, adults, individuals with disabilities, and people aged 65 and older,” says CRS.

“The federal government and states jointly finance the Medicaid program,” says CRS. “Federal Medicaid spending is an entitlement, with total expenditures dependent on state policy decisions and use of services by enrollees.”

“The State Children’s Health Insurance Program (CHIP) is a means-tested program that provides health coverage to targeted low-income children and pregnant women in families that have annual income above Medicaid eligibility levels but have no health insurance,” says CRS. “CHIP is jointly financed by the federal government and the states, and the states are responsible for administering CHIP.”