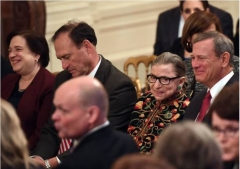 (CNSNews.com) - When the Supreme Court ruled 7-2 today in the case of Trump vs. Vance that the president is not “absolutely immune” from being subpoenaed by local prosecutors, Justice Samuel Alito dissented.

He argued that presidents could be subjected to criminal subpoenas and prosecution after they leave office—or are impeached—but not while they are still serving.

One consequence of the court’s decision, Alito argued, was that politically motivated local prosecutors could subpoena the president for political reasons.

“As for the potential use of subpoenas to harass, we need not ‘exhibit a naivete from which ordinary citizens are free,’” wrote Alito in his dissent.

“As we have recognized, a President is ‘an easily identifiable target,’” Alito said.

“If a sitting President is intensely unpopular in a particular district—and that is a common condition—targeting the President may be an alluring and effective electoral strategy,” said Alito.

“But,” he said, “it is a strategy that would undermine our constitutional structure.”

“The subpoena at issue here is unprecedented,” said Alito. “Never before has a local prosecutor subpoenaed the records of a sitting President. The Court’s decision threatens to impair the functioning of the Presidency and provides no real protection against the use of the subpoena power by the Nation’s 2,300+ local prosecutors.

“Respect for the structure of Government created by the Constitution demands greater protection for an institution that is vital to the Nation’s safety and well-being,” he concluded.

Alito argued that the proper constitutional way of dealing with a president who has committed a criminal offense is to first impeach and remove him—as provide for in the Constitution—and then prosecute him.

“The constitutional provisions on impeachment provide further support for the rule that a President may not be prosecuted while in office,” said Alito.

“The Constitution not only sets out the procedures [impeachment and removal] for dealing with a President who is suspected of committing a serious offense; it also specifies the consequences of a judgement adverse to the President,” Alito said.

“After providing that the judgment cannot impose any punishment beyond removal from the Presidency and disqualification from holding any other federal office, the Constitution states that ‘the Party convicted shall nevertheless be liable and subject to Indictment, Trial, Judgment, and Punishment, according to Law,’” said Alito. “The plain implication is that criminal prosecution, like removal from the Presidency and disqualification from other offices, is a consequence that can come about only after the Senate’s judgment, not during or prior to the Senate trial.”