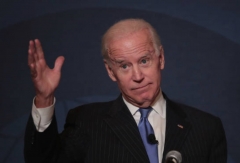 The proposal says that it aims to reduce deficits starting a decade from now—rather than in the next ten years.

Biden, who is 78 years old, could serve as long as eight years as president--if he is elected to a second term.

“The full set of proposals in the Budget reduce the annual deficit by the end of the 10-year budget window and every year thereafter,” says the budget. “In the second decade, the Budget’s proposals reduce deficits by over $2 trillion.”

“A Budget that added to long-term deficits would worsen fiscal health, while a Budget that reduced deficits today by underinvesting in the American people would result in slower, more stratified growth that would cause more damage than one that invests appropriately,” it says.

“The Budget,” it says, “responsibly balances those needs and risks by charting an economically and fiscally sound course for the near term and the long term.”