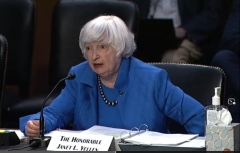 (CNSNews.com) - The Biden Administration is proposing that Congress enact legislation to require that financial institutions annually report to the Internal Revenue Service what Treasury Secretary Janet Yellen describes as the “aggregate inflows into the account during the year and the aggregate outflows” for all accounts that are worth at least $600 or that engage in at least $600 worth of transactions.

In its written outline of the proposal, the Biden Treasury Department calls the plan “a comprehensive financial account information reporting regime.”

“Requiring comprehensive information reporting on the inflows and outflows of financial accounts will increase the visibility of gross receipts and deductible expenses to the IRS,” says the Treasury Department proposal.

“The proposal,” it says, “would create a comprehensive financial account information reporting regime.

“Financial institutions would report data on financial accounts in an information return,” it says. “The annual return will report gross inflows and outflows with a breakdown for physical cash, transactions with a foreign account, and transfers to and from another account with the same owner.

“This requirement,” says the proposal, “would apply to all business and personal accounts from financial institutions, including bank, loan, and investment accounts, with the exception of accounts below a low de minimus gross flow threshold of $600 or a fair market value of $600.”

The Treasury Department initially made this proposal in May along with other revenue proposals, claiming at that time that it would bring in $462.6 billion in additional tax revenues over the next ten fiscal years.

Treasury Secretary Janet Yellen defended the proposal in testimony this week before the Senate Banking Committee and the House Financial Services Committee.

“There was an article in the Wall Street Journal dated September 15,” Kustoff said. “The headline is: ‘Yellen, IRS Push Democrats to Require Banks to Report Taxpayers' Annual Account Flows.’

“I want to read the first two paragraphs just briefly,” Kustoff said. He then read: “‘Treasury Secretary Janet Yellen and IRS Commissioner Charles Rettig pressed lawmakers Wednesday to give the Internal Revenue Service more information about taxpayers' bank accounts, as the Biden Administration tries to salvage its struggling tax-compliance proposal. In letters to lawmakers, the administration officials again asked Congress to require banks to report annual inflows and outflows from bank accounts with at least $600 or at least $600 worth of transactions, a proposal aimed at letting the IRS target its audits more effectively. It would generate about $460 billion over a decade to cover the costs of Democrats’ planned expansion of the social safety net and climate change policies, according to the administration.’

“Those are the first two paragraphs of the story,” Kustoff told Yellen. “That’s an accurate reflection of what you’ve done, correct?”

“We have proposed both augmenting the resources of the IRS so that it can hire qualified auditors and augmenting the information flow so that the IRS gets insight into opaque sources of income, and both together, we believe, can serve to greatly address the $7-trillion estimated tax gap that we’ll see in this country over the next decade.”

“I don’t believe it’s an invasion of privacy,” Yellen told Kustoff a moment later. “And, look, the IRS gets a great deal of information that it needs in order to make sure that taxpayers comply with the tax code.”

In the Senate Banking Committee on Sept. 28, Yellen had an exchange with Sen. Cynthia Lummis (R.-Wyo,), in which she explained that the administration wanted its proposal to target accounts worth as little as $600 so that people could not “game the system.”

“This is not a proposal to provide detailed transaction-level data by banks to the IRS,” Yellen testified. “It is a proposal to add two additional pieces of easily ascertained information on to the 1099-INT form that banks already file, namely the aggregate inflows into the account during the year and the aggregate outflows.”

“I think it's important to recognize that we have a tax gap that's estimated at $7 trillion over the next decade,” Yellen said. “That is taxes that are due and are not being paid to the government that deprives us of the resources we need to do critical investments to make America more productive and competitive. And the reason that that tax gap in part exists, partly it's because the IRS has been deprived of revenue to hire auditors.

“But the IRS has a wealth of information about individuals,” Yellen continued. “If you work at a job where you get labor income, a W-2 is filed and sent. There are dividend payments and transactions payments that are sent to the government. But there are a class of partnerships, businesses, high-income individuals who have opaque sources of income that the IRS doesn't have direct information about, and that's where the tax gap is, not low-income people.

“And this additional information would help,” Yellen said.

Lummis then asked her: “Well, a $600 threshold is not usually where you're going to find the massive amount of tax revenue you think Americans are cheating you out of.”

“That's correct,” Yellen conceded. “But it's important to have comprehensive information so that individuals can't game the system and have multiple accounts.”

The Boston Herald ran an editorial on Wednesday opposing Biden’s proposal. It was headlined: “Don’t let IRS spy on our bank accounts.” The Herald noted that the proposal “offends Fourth Amendment protections against unreasonable search and seizure.

“Taking all these records and sifting through them for possible audits is an incredible overreach and an unprecedented invasion of the privacy of untold millions of Americans,” said the Herald in its editorial.