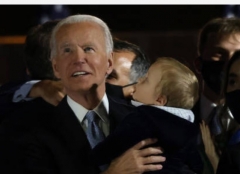 The case is reviewing the constitutionality of a Mississippi law that prohibits most abortions after 15 weeks of pregnancy.

It was argued before the Supreme Court on December 1 and has not been decided yet.

Prelogar participated in the oral arguments, representing the Biden Administration and presenting its argument against allowing states to prohibit abortions after 15 weeks.

During the oral arguments, Justice Clarence Thomas asked Prelogar to specifically state what “right” the administration was claiming was protected by the court’s opinion in Roe v.  Wade and it was now seeking to defend in Dobbs vs. Jackson Women’s Health.

In response, Prelogar referred to it as “the right of a woman to be able to control…whether to carry that baby to term.”

She did not call it a fetus or any other technical term. She called the unborn baby simply a “baby.”

“General, would you specifically tell me, specifically state what the right is?” Justice Thomas asked her. “Is it specifically abortion? Is it liberty? Is it autonomy? Is it privacy?”

“The right is grounded in the liberty component of the Fourteenth Amendment, Justice Thomas, but I think that it promotes interest in autonomy, bodily integrity, liberty, and equality,” Prelogar responded.

“And I do think that it is specifically the right to abortion here,” she continued, “the right of a woman to be able to control, without the state forcing her to continue a pregnancy, whether to carry that baby to term.”