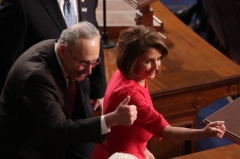 (CNSNews.com) - The ‘For the People Act’ that the House of Representatives passed on March 3--with only one dissenting Democrat--would allow people to vote in U.S. federal elections without going to a polling place or presenting an identification to prove who they are.

Section 1903 of the 886-page bill is entitled: “Permitting use of sworn written statement to meet identification requirements for voting.”

In “findings” published at the beginning of the massive bill, the House declares “that States and localities have eroded access to the right to vote through…excessively onerous voter identification requirements.”

The bill goes on to conclude that requiring voters to have an identification places a financial burden on them.

On page 23, it says: “Congress finds that…voter identification requirements…burden voters on account of their ability to pay.”

Section 307, which starts on page 186 of the 886-page bill, is called “Promoting the Ability of Voters to Vote by Mail.” It expressly forbids states from requiring voters to provide identification before getting a mail-in or absentee ballot.

Under the terms of the “For the People Act,” when someone votes without an ID a state may not require that ID-less voter to have someone witness their signature of notarize it.

This section is entitled: “Prohibiting requirement to provide notarization of obtaining or casting ballot.”

It says: “A State may not require notarization or witness signature or other formal authentication (other than voter attestation) as a condition of obtaining and casting a ballot.”

Section 303A overrides state laws that require people to present an ID when voting, holding instead that a person without an ID need only fill out a pre-printed sworn statement to vote. It is entitled: “Permitting Use of Sworn Written Statement to Meet Identification Requirements.”

This section says: “In General—Except as provided in subsection ( c ), if a State has in effect a requirement that an individual present an identification as a condition of receiving and casting a ballot in an election for Federal office, the State shall permit individual to meet the requirement—(A) in the case of an individual who desires to vote in person, by presenting the appropriate State or local election official with a sworn written statement, signed by the individual under penalty of perjury, attesting to the individual’s identity and attesting that the individual is eligible to vote in the election; or (B) in the case of an individual who desires to vote by mail, by submitting with the ballot the statement described in subparagraph (A).”

It also instructs states to make available to voters a “pre-printed version” of this statement “which includes a blank space for the individual to provide a name and signature.”

This “For the People Act” passed the House on March 3 by a vote of 220 to 210. No Republicans voted for it. Rep. Bennie Thompson of Mississippi was the only Democrat to vote against it.

The bill has been sent to the Senate, which has not taken action on it. It can be stopped by a Republican filibuster, which Senate Democrats would need a 60-vote majority to overcome.

Here is the text from the bill requiring states to let people vote without an ID: