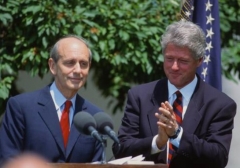 This is from the May 13, 1994 press conference where President Bill Clinton announced he was nominating Stephen Breyer to the Supreme Court. (Photo by Ron Sachs/CNP/Getty Images)

(CNSNews.com) - Justice Stephen Breyer, who reportedly will be retiring from the Supreme Court this year, claimed in the 2000 case of Stenberg v. Carhart that engaging in a partial-birth abortion is a constitutional right, noting that the procedure involved, as stated in a Nebraska law, ‘deliberately and intentionally delivering into the vagina a living unborn child, or a substantial portion thereof.”

“We understand the controversial nature of the problem,” Breyer said at the beginning of the opinion he wrote for the court in that case.

“Millions of Americans believe that life begins at conception and consequently that an abortion is akin to causing the death of an innocent child; they recoil at the thought of a law that would permit it,” Breyer said.

“We hold that this statute violates the Constitution," said in the court's opinion overturning Nebraska's partial-birth abortion ban.

Seven years later, in the case of Gonzales v. Carhart, the court would reverse this opinion and uphold the constitutionality of partial-birth abortion bans. However, Breyer would dissent in that case, maintaining his claim that the Constitution protected a right to kill a partially-born baby.

“The statute defines ‘partial birth abortion’ as: ‘an abortion procedure in which the person performing the abortion partially delivers vaginally a living unborn child before killing the unborn child and completing the delivery.’ § 28–326(9).

“We hold that this statute violates the Constitution.”